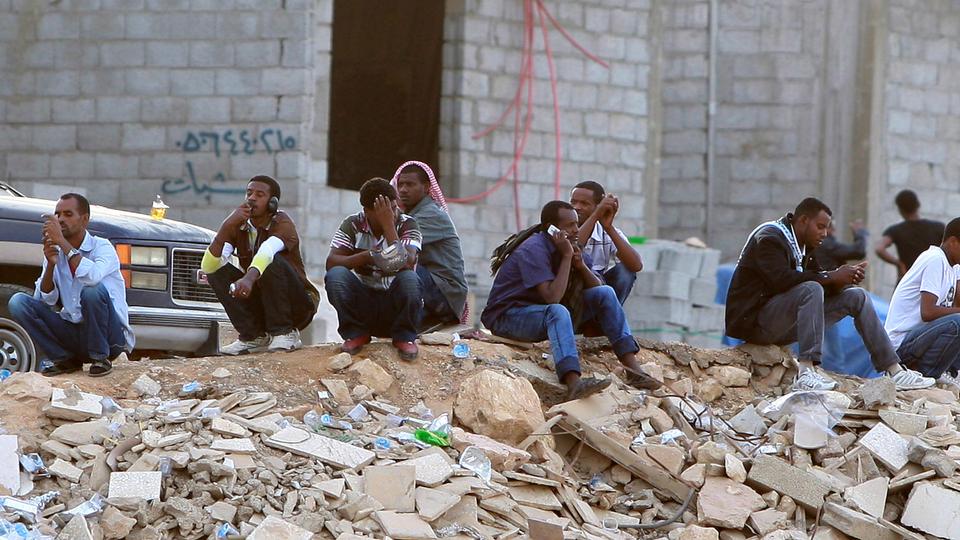 West News Wire: The British website Middle East Eye has released a report on migrants in Saudi Arabia, revealing that Saudi authorities are detaining and deporting thousands across Saudi Arabia.

The website noted in a report that Saudi authorities continue to detain thousands of African and Yemeni migrants, while at the same time concealing the blatant abuses and deplorable conditions in the detention centers of the detained migrants.

Ethiopian immigrants have reportedly been beaten, extorted and extradited to unsanitary and crowded rooms in Saudi detention centers. Inspectors confiscated telephones and any devices that could be used to transmit images of their torture to the outside world.

Human Rights sources said the crackdown was an attempt to prevent their conditions from being broadcast to the world during Ramadan, which would risk criticism and uproar in the Muslim world during the holy month.

Before deporting migrants, Saudi police force them to sign agreements that bar them from talking to journalists about their past experiences in Saudi Arabia.

“They came in here looking for phones because they don’t want the world to see images of our suffering here,” said Semir, an Ethiopian migrant being held at a deportation center in Riyadh. “When they would find a phone, they would beat up the owner with batons.”

The number of Ethiopian detainees held at various migrant detention centers has increased in recent months. In an attempt to ease the burden, Saudi authorities reached an agreement with Ethiopia in March to fly out at least 100,000 Ethiopians, many of whom were detained in waves of anti-migrant crackdowns last year.

Ethiopians held in the centers told MEE that they are given little to eat and are held for months in putrid, overcrowded rooms.

“People are going mad here. There is little food and many of us haven’t been outdoors in almost nine months,” said Nebil, a detainee in Riyadh. “We used to get a piece of bread three times a day. Since Ramadan, we get it only once, at night.”

Images leaked in 2020 through a smartphone in a detention center showed pictures of hundreds of emaciated African men, some appearing to be on the brink of death, many of them in a very small, unsanitary rooms, where sewage flowed and disease was rampant.

Rights groups confirmed that abuse and deaths were commonplace at these centers, and in October 2020 the European Union parliament passed a resolution condemning Saudi Arabia for its mistreatment of migrants.

The uproar eventually led to tens of thousands of migrants being repatriated throughout 2021, many of whom are struggling to cope with enduring trauma.

The statements by the migrants about the conditions at the detention centers appear to correspond with the assessment of staffers from the International  Organization for Migration (IOM) and other UN agencies.

“In addition to injuries and illnesses suffered due to the hazardous journey, the IOM has observed that communicable diseases, such as tuberculosis and skin conditions are prevalent among returnees,” said Yvonne Ndege, spokesperson for the agency’s East and Horn of Africa office.

“We have been left here to rot,” said Ali, a migrant at al-Shumaisi center. “Since they put me here, I’ve seen diplomats from Chad, Ghana, and Somalia come to enquire about their citizens.

Ali added that, while beatings of migrants and poor sanitation have long been the norm, in recent months prison officials have begun extorting the families of detainees.

“Every week, the guards come here with what they call a ‘souq’ [market]. They bring clean water, biscuits, and other items from outside. We can only purchase these items by having our families transfer money to the personal accounts of guards and prison staff. But they charge us more than the price on the Saudi market, and they pocket a lot of the money transferred to them.”

Meanwhile, the uncertainty and the situation of the detainees is not limited to the migrants who have recently traveled to Saudi Arabia, but some detainees have lived in Saudi Arabia for many years and for some reason are now unable to renew their work documents, so the police arrest them. For example, those who used to work legally in Saudi Arabia may now lose their jobs due to the bankruptcy or closure of a company.

However, mass arrests by Saudi authorities continue to target thousands more, with 15,000 migrants, almost all of them Ethiopians and Yemenis, detained in a single week in March alone.

Although slavery has been officially banned in Saudi Arabia since 1964, many foreign workers in the country now live in slave-like conditions, and documented reports usually published show foreign workers with problems such as overwork.

Foreign workers in this country face problems such as overwork, fatigue, torture and even deprivation of water and food.