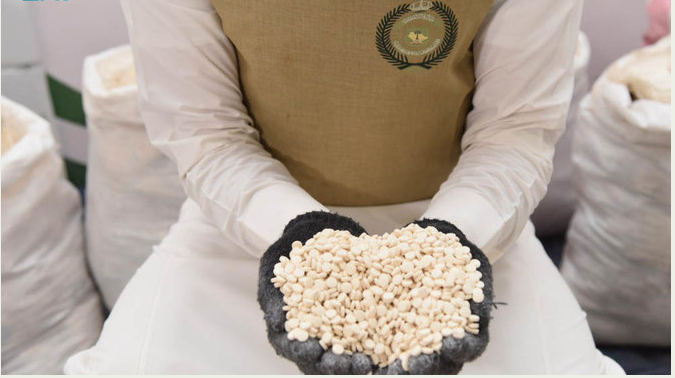 West News Wire: For many years, the Hajj season has become a means for Saudi princes and officials, during which drug trafficking into Saudi Arabia has seen a multifold increase.

As the Hajj rituals began in Saudi Arabia, the media broadcasted a number of news and reports about the seizure of drug shipments from pilgrims from different countries and repeatedly it has been from the countries that send pilgrims to Saudi Arabia. The pilgrims are strictly refrained from transporting drugs into Saudi Arabia and repeatedly reminded of the punishments for this crime.

The question is, do pilgrims really smuggle drugs and transport them to the land of Saudi Arabia? Or at other times and months of the year, don’t Saudis face the problem of drugs and drug trafficking?

According to the United Nations Office on Drugs and Crime (UNODC], between 2015 and 2019 more than half of all Captagon seized in the Middle East was in Saudi Arabia and its users were Saudi teenagers and young people in the age group of 12 to 22 years.

The intention here is not to reject or deny the claims of the Saudi media about the increase in drug smuggling to Saudi Arabia during the Hajj rituals, no, perhaps these news and reports are confirmed, but what should be taken into consideration are drug traffickers who are mistakenly introduced as pilgrims.

In this regard, many reports have been published by Saudi and international sources that emphasize, the officials of Saudi Arabia, both at the level of the ruling family and at the level of those close to the government, are involved in the phenomenon of drug trafficking, and they use Hajj days as a means to increase drug trafficking into Saudi Arabia.

In one of these scandals, the newspaper “Daily Telegraph” published a report about the arrest of one of the security officers of the Ministry of Interior of Saudi Arabia, revealing some facts about the involvement of Saudi officials in the management and operations of drug smuggling into the country during the Hajj rituals.

According to the Daily Telegraph report: “Major Turki bin Hamza al-Rashidi, who worked in the Saudi Interior Ministry’s Narcotics Control Division, says that a network of powerful regime insiders has made “billions” from smuggling narcotics into the kingdom.”

In several Youtube messages, Major Rashidi says that one method is the “twin buses game”. This involves a “clean bus” full of pilgrims heading for Mecca to perform the Hajj being certified by customs, before the same documentation is later used to allow a “dirty bus” laden with drugs to enter the kingdom.

Major Rashidi claims the scam has been running for decades, with hundreds of buses making thousands of trips. The narcotics earnings enter the kingdom’s financial system under the guise of legitimate income arising from the pilgrimage, the whistleblower notes.

Major Rashidi adds that he uncovered evidence that implicated senior officials in the “bus scam”. But when he passed on the dossier, a campaign of intimidation was started against him and he was transferred to work on Saudi Arabia’s remote northern border.

This officer of Saudi Arabia’s anti-narcotics department, stating that he was fired from his position on false accusations, added: “My research shows that this method of drug trafficking has been going on for 30 years in Saudi Arabia and during the Hajj period, and none of the security forces and the police, despite knowing about it, have dared to reveal it, I have no doubt, I am being prosecuted because of the revelations and I will be killed in some way.”

To explain the quantity of smuggling carried out by Saudi princes and officials during Hajj, it is enough to refer to the one million and 200 thousand pilgrims, who come to Saudi Arabia from different corners of the world to perform Hajj rituals, and from the airports of this country, they are transported to Mecca and Medina by buses, arranged for them by the Saudi event organizers.