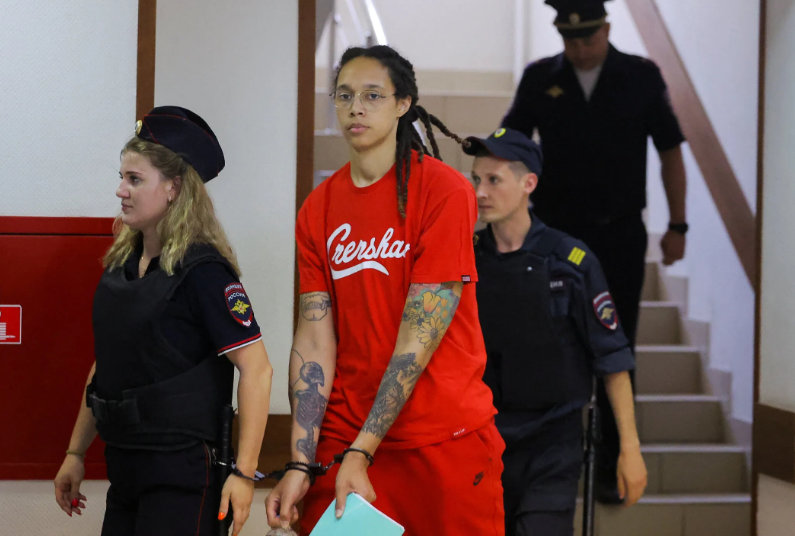 West News Wire: The verdict in the Russian drug case against American women’s basketball player Brittney Griner was announced by the court on Thursday at Khimki City Court outside of Moscow.

On February 17, Griner was stopped at Sheremetyevo Airport, which is located outside of Moscow, after illegal hashish oil vape cartridges were discovered in her luggage.

The 31-year-old entered a guilty plea during her trial, but she claimed the cartridges accidentally fell into her baggage while she was rushing to pack.

Prosecutors had sought nine and a half years in a prison colony for Griner as well as a $16,500 fine earlier on Thursday.

The player herself had apologized, saying she made “an honest mistake under stress” in a tearful address to court.

The sentence will be announced by judge Anna Sotnikova in due course after Griner was found guilty of attempting to smuggle illegal narcotics.

The maximum possible punishment for the charges is 10 years in prison.

Griner’s case has played out amid an increasingly political backdrop, with the US classifying her as “wrongfully detained.”

Moscow has denied those claims, asserting that Griner must face Russian law and that no exceptions should be made because she is a foreigner.

The plight of the two-time Olympic champion and the publicity surrounding her case has placed pressure on the Biden administration to secure her release.

US Secretary of State Antony Blinken revealed last month that Washington had made Moscow a “substantial offer” for the release of Griner and fellow American Paul Whelan, a former Marine who has been convicted of espionage charges in Russia.

Reports claimed that a swap deal could be made with Russian businessman Viktor Bout, who is serving 25 years in a US prison for arms dealing.

Additionally, Russian officials have demanded that Griner’s case must be resolved before talks of a possible prisoner swap can begin.

Griner, a member of the Phoenix Mercury and an eight-time WNBA All-Star, was departing for Russia on a lucrative deal to play for UMMC Ekaterinburg in the offseason, as she has done for the past few years.

A certificate that stated she had a prescription for the use of cannabis for medical purposes in the US to treat the pain from her injuries was displayed to the court earlier during the trial.