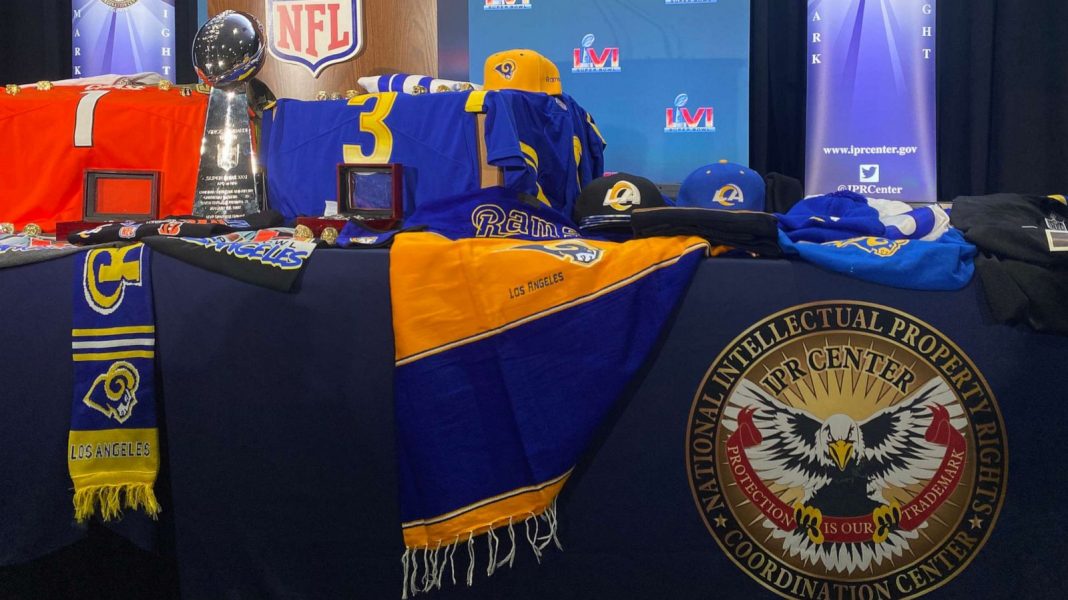 During “Operation Team Player,” a joint task force operation involving the US Homeland Security Investigations, the Los Angeles County Sheriff’s Department, Customs and Border Protections, and the NFL, among other agencies, more than 267,500 items, including fake hats, jerseys, tickets, and other souvenirs, were seized.

Officials assessed the stuff to be worth $97.8 million on Thursday.

“We will not tolerate those who victimize fans by selling fake merchandise and tickets,” Lt. Geoff Deedrick of the L.A. County Sheriff’s Department said during a news conference. “We recognize the fans are spending their hard earned money and expect to have an authentic product, and we will work diligently to make sure that happens.”

The anticipated matchup between the L.A. Rams and Cincinnati Bengals is taking place Sunday at Inglewood’s SoFi Stadium. Leading up to the game, officials said they would continue scouring L.A. County, as well as websites to hunt down bogus distributors.

“Don’t put yourself at risk,” NFL Intellectual Property Counsel Bonnie Jarret said. “Buy authentic NFL merchandise and tickets from established retailers and trusted sources. Beware of phony online ads for products and tickets, whether they’re on websites, social media or marketplace listings. If it sounds too good to be true, it probably is.”

The value of this year’s seizure is already more than double the amount of last year, when Operation Team Player nabbed $45 million worth of counterfeit items. Officials have collected more than $5 million in products since the middle of January alone, Deedrick said.

Authorities are also warning fans to only purchase Super Bowl tickets through the NFL ticket network consisting of Ticketmaster, StubHub, Seat Geek and other sites guaranteed by the agency not from scalpers surrounding the arena on game day.

“This year, for the Super Bowl, there are no paper tickets, so anyone walking around the stadium, or on the adjoining streets trying to sell a ticket, it is a counterfeit and it is a fake, Deedrick said. “So please do not buy a ticket on the streets in and around SoFi stadium.”

Screenshots of tickets, PDF printout, and paper tickets will not be valid, said Michael Buchwald, senior counsel with the NFL.

“Do not buy tickets from unreliable sources,” Buchwald said. “Whether online, outside the stadium or elsewhere, that will leave you open to fraud.”