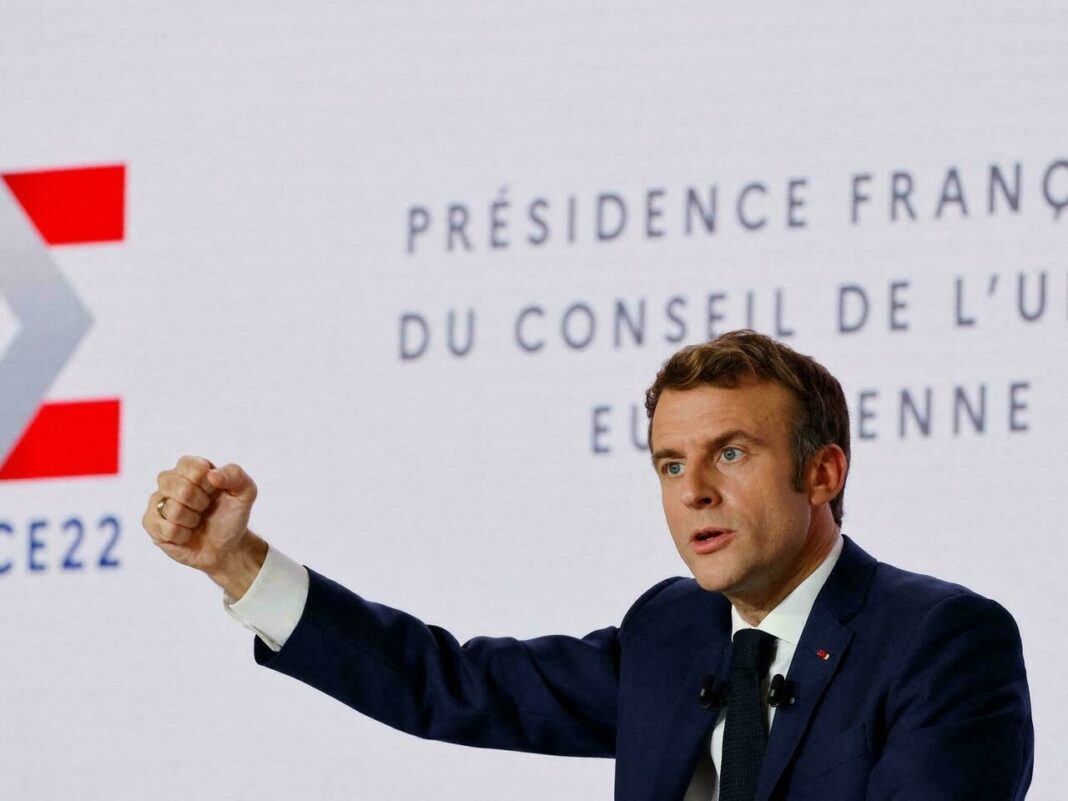 West News Wire: On Saturday, France assumed the six-month rotating presidency of the European Union, with an ambitious plan for a “strong” and “sovereign” Europe, but the new outbreak of COVID-19 and the April presidential elections are likely to derail it.

France took over from Slovenia, which had held the EU Council president since July 1, at midnight (23:00 GMT on Friday), and will be succeeded by the Czech Republic in the second part of the year.

The Eiffel Tower and the Elysée Palace were both lit up in blue, the European flag’s color, at the same moment as a symbol of the handover.

The installation of the European flag beneath the Arc de Triomphe in Paris, however, sparked debate.

Far-right presidential candidates Marine Le Pen and Eric Zemmour said they were “outraged” that the French flag had been replaced by the EU flag “over the tomb of the unknown soldier”.

“The French flag will obviously be reinstalled,” replied the Secretary of State for European Affairs, Clément Beaune, denouncing “sterile polemics”.

“You can count on my total commitment,” he said in his New Year’s address. “To make this moment, which only occurs once every 13 years, a time of progress: a time of progress for the control of our borders, our defence, climate transition, equality between women and men, the construction of a new alliance with the African continent, supervision of the major platforms of the internet, and culture in Europe.”

For six months, France will therefore have considerable influence to push forward certain issues and find compromises for the 27 Member States, even if the exercise, which is very closely supervised, requires neutrality and tact.

Macron has set the bar very high: “2022 must be the year of a European turning point,” he said.

It is a question of making “Europe powerful in the world, fully sovereign, free of its choices and master of its destiny”, he explained on 9 December.

The French presidency of the European Union (FPEU) has set three priority areas: the introduction of minimum wages throughout the EU, the regulation of digital giants and the creation of a carbon tax on products imported into Europe according to their environmental impact.

Macron also advocates a reform of the Schengen area to better “protect Europe’s borders” in the face of migratory crises, a subject that will be at the heart of the French presidential campaign.

He also intends to put on the table a revision of the budgetary rules – the famous Maastricht criteria which govern European deficits, in order to be able to finance more European investments and growth.

And to continue to make progress on European defence, despite the reluctance of certain partners who are above all attached to the protection of NATO.

These are ambitions that he has not ceased to display since his election in 2017, but not without causing tension among some of his partners, particularly in Eastern Europe.

However, he can count on the support of the new German chancellor, the social democrat Olaf Scholz, who will preside over the G7 in 2022 and who also advocates a “more sovereign and strong Europe”.

“Together, we will work for a more digital, ecological and social Europe, whose voice is heard in the world,” European Commission President Ursula von der Leyen also tweeted on Saturday.

The council presidency coincides with France’s presidential election it confers on the holder a chance to influence priorities on the European agenda.

The EU is at a crossroads on a number of issues, from security in Europe  tens of thousands of Russian troops are massed at the gates of Ukraine  to the health crisis that is once again clouding the economic horizon.

However, France’s EU presidency will be severely hampered by the country’s presidential election in May and legislative elections in June, lowering the amount of time available for action.

The rise of the Omicron variety will also throw off the schedule, at least in January, when many meetings will be held online.

The opposition accuses Emmanuel Macron of using the “PFUE” for political gain, despite the fact that he has yet to make an announcement. Macron is a strong candidate for re-election.

“It might be an asset for the French president but it can also be a liability,” Thierry Chopin, a political science professor at the Catholic University of Lille, said, “if his political opponents choose to attack him head-on on his European policies” (north).