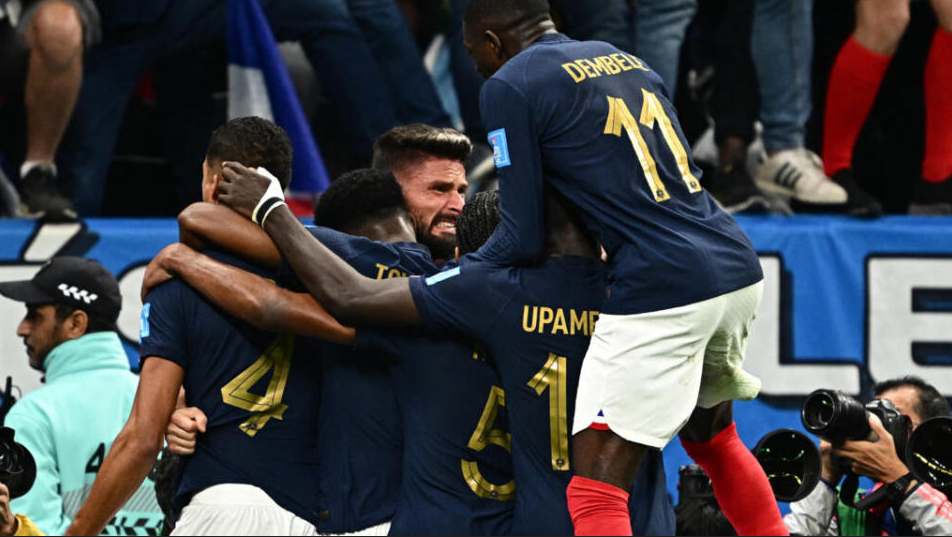 West News Wire: In a thrilling match, France defeated England 2-1 to go to the World Cup semifinals against Morocco, who stunned Portugal in the day’s second quarterfinal.

At Al Bayt Stadium on Saturday, Aurelien Tchouameni scored a fierce long-range goal in the 17th minute to give France the lead. The dismissal of two claims for alleged fouls on Bukayo Saka just moments before the defending world champions opened the score particularly incensed England supporters.

The first half was generally evenly matched, but England came out strong in the second. Soon after the opening kickoff, Saka was pulled down once more, but this time it was within the French box, and the referee pointed to the location.

Captain Harry Kane blasted the penalty kick into the net past his Tottenham Hotspurs’s teammate Hugo Lloris to equalise in the 54th minute in front of a 68,895-strong crowd. It was a goal which left him equal with Wayne Rooney as the joint-highest scorer for the Three Lions.

There was a chance for Gareth Southgate’s men to go ahead in the 70th minute, but Harry Maguire missed the target, putting the ball into the side of the net.

In the 76th, Olivier Giroud found a huge gap in the English defence and levelled a massive left-foot volley. It was caught safely by Pickford, but England were not off the hook for long.

Another minute, another cross, another chance for Giroud, and France’s leading goalscorer headed home to give France the lead, sending Les Bleus fans inside the stadium into ecstasy.

England had a golden chance to equalise in the 84th minute after Theo Hernandez barged into Mason Mount inside the box, but Kane this time skied his penalty attempt into orbit.

In the end, the French press was too strong for the Three Lions to stomach, and France go on to play Morocco in the World Cup semi-final on Wednesday at Al Bayt Stadium.

“It’s extraordinary. We worked really hard defensively when we were ahead. It reminds me of Belgium in 2018,” said Giroud, referring to France’s 1-0 win in the semi-finals four years ago in Russia.

“Unfortunately we conceded the penalty. But we were able to be dangerous on a few occasions at the end of the match.You always have to believe and (Antoine) Griezmann gave me a great ball (for the goal),” added Giroud.

England manager Gareth Southgate ​said he did not think his side could have done any more and had given France a great game.

“I think it was just the key moments, you’re playing in a high level game where there aren’t going to be many chances created and within most of the big moments we were in the right place,” he said, while also backing Kane.

“For me, we win and lose as a team and we’ve let a couple of goals in and missed a few chances,” Southgate said. “Harry has been incredible for us, so reliable in those sorts of situations. We wouldn’t be here, but for the number of goals he scored for us,” he added.

At the stadium, France fans were happy their team booked a place in the semi-final.

“It was a close game. They did not want to play. Kylian Mbappe was marked everywhere he went,” Max Balazun told news reporters.

“It’s going to be a very hard game against Morocco. They eliminated Spain and Portugal,” he said.