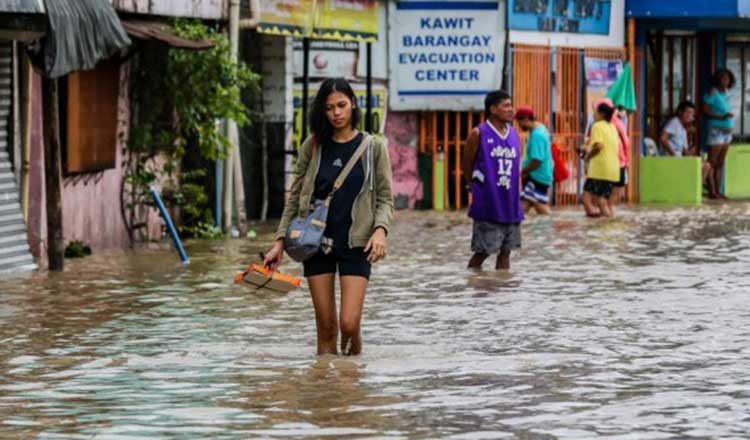 West News Wire: Days of intense rain in the Philippines resulted in flash floods that claimed at least 13 lives while as 23 more are missing, as per the latest reports. The flooding disrupted Christmas celebrations there and compelled almost 50,000 people to seek refuge.

The deaths were announced by the country’s disaster service on Tuesday, with a note that the majority were due to drowning during floods in the southern regions. The regional authorities continue their search for 23 additional people who are still missing as the waters start to subside.

A week of torrential rain caused numerous rivers, highways, and roads to overflow with water, severely flooding rural communities as well as urban areas like Ozamiz and Oroquieta.

“The heart of the city was flooded including the public market. Power was cut off and there was no [telephone] signal,” said Misamis Occidental province Governor Henry Oaminal, referring to Oroquieta, a city with around 72,000 residents.

According to data gathered by the Social Welfare Ministry, around 46,000 people were sheltered at evacuation sites around the country as of Monday. Media reports indicated that many citizens were forced to trudge through waist-deep water in some harder-hit areas, where a number of landslides were also observed in the wake of the floods.

An official from the regional disaster agency in Misamis Occidental, Carmelito Heray, told local media that rescue operations are still underway, and that damage to local infrastructure, especially related to agriculture, was being assessed.

While the largely Catholic nation typically sees around 20 tropical storms each year, the inclement weather over the holiday was not classified as such. Still, the Philippines frequently experiences deadly floods and landslides from heavy rains, especially common during its summer and winter monsoon seasons.