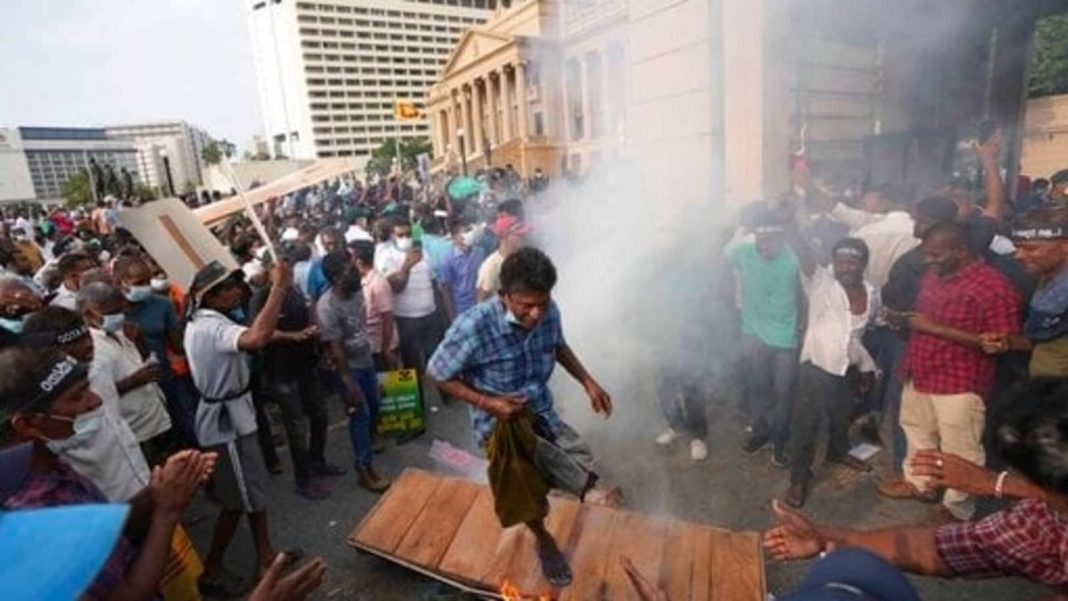 West News Wire: After a day of violence in which five people were killed, including a member of parliament from the ruling party, Sri Lankan Prime Minister Mahinda Rajapaksa was forced to resign, with reports of people assaulting homes associated to the ruling party around the island nation.

AFP reported that shots were fired from inside the official mansion of Sri Lanka’s prime minister on Monday, as thousands of protestors broke through the front gate and set fire to a parked truck.

After being besieged by a throng at Nittambuwa, around 40 kilometres (25 miles) from Colombo, legislator Amarakeerthi Athukorala of the ruling party shot two persons, killing a 27-year-old male, police said.

The MP and his security man were seen rushing inside a nearby building on CCTV. They were later discovered to be deceased.

Nearly 150 people were wounded on Monday after supporters of the government armed with sticks and clubs attacked peaceful protesters.

Angry mobs have stormed the houses and properties of Rajapaksa loyalists across the country despite the state of emergency and police curfew.

The house of Saman Lal Fernando, mayor in the Colombo suburb of Moratuwa, was set ablaze hours after he took eight busloads of municipal workers to express solidarity with the Rajapaksas.

A tourist hotel owned by a close associate of Mahinda Rajapaksa’s children was also set ablaze, along with a Lamborghini car parked inside. There were no casualties among foreign guests, police said.

Mobs attacked the controversial Rajapaksa museum in the family’s ancestral village in the deep south of the island and razed it to the ground, police said. Two wax statues of the Rajapaksa parents were flattened.

A number of religious leaders also met President Gotabaya Rajapaksa on Monday night, urging him to take immediate steps to stabilise the country. They called for the appointment of a neutral prime minister.

Sri Lanka has suffered months of blackouts and dire shortages of food, fuel and medicines in its worst economic crisis since independence, sparking weeks of overwhelmingly peaceful anti-government demonstrations.