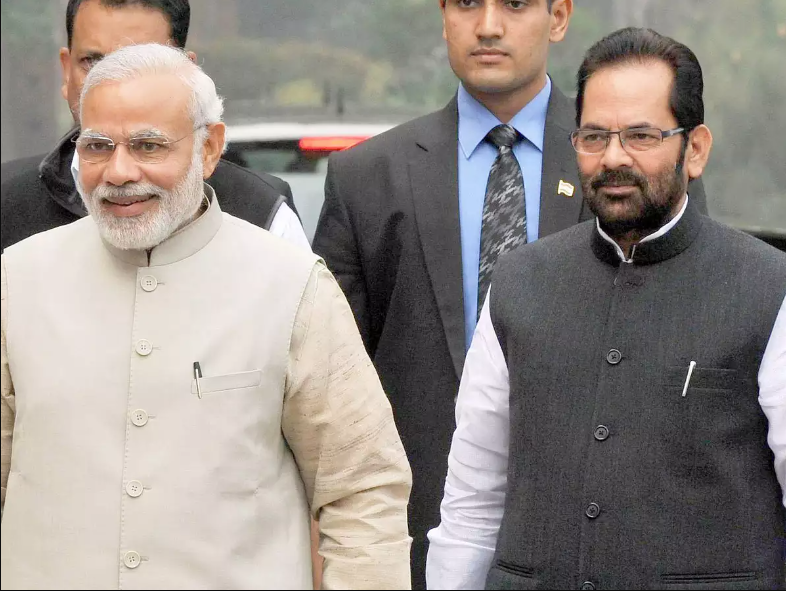 West News Wire: For the first time in its history, India’s ruling party lacks a Muslim parliamentarian as a result of the resignation of a federal minister.

Mukhtar Abbas Naqvi, the minister for minorities affairs, announced his resignation on Wednesday, one day before his term as a member of parliament (MP) was set to expire.

The 64-year-old politician was the only Muslim minister in the nearly 400-member Bharatiya Janata Party (BJP), a Hindu nationalist organization led by Prime Minister Narendra Modi.

Naqvi’s resignation coincides with accusations that the BJP has been persecuting the minority community since taking office in 2014.

About 200 million Muslims live in India, making it the third-largest Muslim nation in the world after Indonesia and Pakistan.

Naqvi has been replaced by actress-turned-politician Smriti Irani, 46.

Media reports speculated that the BJP could be considering Naqvi for the post of India’s vice-president amid global outrage over one of its officials making controversial anti-Islam remarks.

The vice-presidential polls are scheduled on August 6 while the term of the current incumbent, M Venkaiah Naidu, ends on August 10.

Last month, the BJP nominated Droupadi Murmu for the president’s post. If Murmu wins, she will be India’s first tribal politician and the second woman to hold the position.

India’s constitution provides a largely ceremonial role for the president and vice-president, with the prime minister and his cabinet holding the executive powers.

Modi’s BJP, which claims to be the “biggest political party in the world”, has 301 members in the lower house of parliament who are elected directly by the people.

Naqvi’s exit means the right-wing party does not have any Muslim member in the upper house of parliament as well.

Significantly, the BJP does not have a single member of legislative assembly (MLA) in 18 of India’s 28 states the party currently governs, either directly or through its coalition partners.

Journalist and political analyst Arati R Jerath told news reporters that the BJP historically had a “token Muslim presence” but that is no more the case as far as the executive is concerned.

“This is something new and unusual. They don’t even have a token Muslim face anymore. I guess it shows how BJP has changed now under Modi and [federal Home Minister Amit] Shah,” she said.

“It quite openly says that we have shown that we can win an election without the support of Muslims.”

In the 2014 national election, the BJP fielded seven Muslims but none of them won despite an overwhelming support for Modi among the voters that year.

In the 2019 polls in which Modi returned to power with a larger majority, the BJP fielded six Muslim candidates but they again lost.

In India’s most populous state of Uttar Pradesh where 19 percent of the population is Muslim, the BJP repeated its 2017 strategy by not fielding a single Muslim in the assembly elections held earlier this year. In Manipur and Uttarakhand state polls, the party did the same.

Jamal Siddiqui, the head of the BJP’s minority wing, claimed the party does not take religion into account while choosing its candidates.

“The party assigns seats depending upon the requirement and if people see it from the glasses tinted with religion, then it is really very unfortunate,” Siddiqui told news reporters.

Home Minister Shah in March cited “winnability” as a factor while defending the BJP’s decision to keep Muslims out of its list of candidates. “Our ticket distribution is on the basis of winnability,” he said.

Jerath concurs with the BJP’s claim that it can win elections and claims that the party believes a Muslim running for office on its behalf has little chance of success.

“The core Hindu nationalist voter of the BJP would be hesitant to vote for a Muslim candidate,” she said.

Lack of a Muslim MP or MLA, according to Rahul Verma, a fellow at the Centre for Policy Research in New Delhi, is “unlikely to harm” the BJP’s chances of winning elections.

“But the party should not ignore this fact or take pride in it. Since image and reputation are important in politics, the BJP, which is the country’s dominant party, needs to find ways to include Muslims in its administration, legislative body, and ministerial positions.