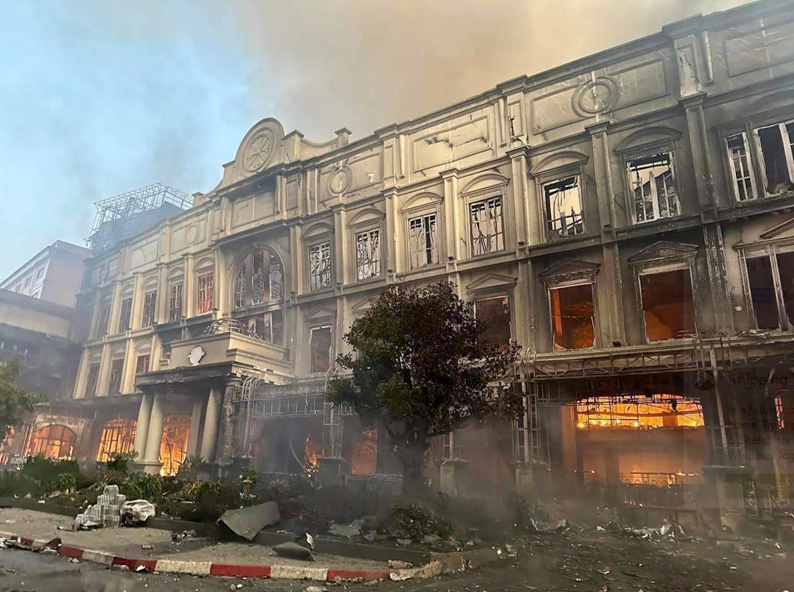 West News Wire: In a fire at a casino in Cambodia, at least 19 people died and many more are thought dead. A rescuer reported that the victims threw themselves off a ledge in a last-ditch effort to escape the flames.

Late on Wednesday night, a fire broke out inside the Grand Diamond City hotel-casino in Poipet, which is close to the Thai border. Cambodian police reported the fire.

Sek Sokhom, head of the provincial information office for Cambodia’s Banteay Meanchey province, stated that as of now, “there are 19 dead as we saw bodies and bones,” but cautioned that “the count could be higher” because rescuers have not yet reached all areas of the complex.

A volunteer with Thai rescue group Ruamkatanyu Foundation who wished to remain anonymous said his team arrived at around 2 a.m. ET and saw people jump from the building.

“I witnessed people running out of the building to escape from the smoke,” he said, adding that a group were also packed onto a rooftop to avoid the flames.

“Then we saw some people jumping down,” he said.

Video showed the building consumed by flames, with firefighters struggling to contain the blaze and rescuers attempting to pluck people from a burning ledge.

In one clip, an unidentified man is seen sitting on a window ledge as smoke billows out from behind him. In another, a group of people huddle on a ledge as flames draw near.

A Thai foreign ministry source said they had been coordinating closely with local authorities, “including by sending in fire trucks from the Thai side.”

Sa Kaeo Governor Parinya Phothisat said another roughly 60 people caught up in the fire had already been checked and cleared by Thai hospitals.

The Ruamkatanyu Foundation volunteer said the blaze started on the first floor but spread quickly along carpets, leaping up through the multi-storey building.

Naphat Klonkliang, an officer with the foundation, told AFP they had retrieved two bodies.

“The rescue team were struggling in the beginning and the main reason was the smoke,” the officer said.

Some victims were believed to still be under debris or in locked rooms that rescue teams could not immediately access, so the death toll was expected to rise, said Sokhom, who told the Associated Press that firefighters were ultimately able to extinguish the fire at around 2 p.m. local time on Thursday. Rescue operations continued after the blaze was out, he reportedly added, noting that a preliminary investigation suggests the fire may have been caused by an overload of New Year’s decorations drawing increased electricity and causing wires to overheat and burn.