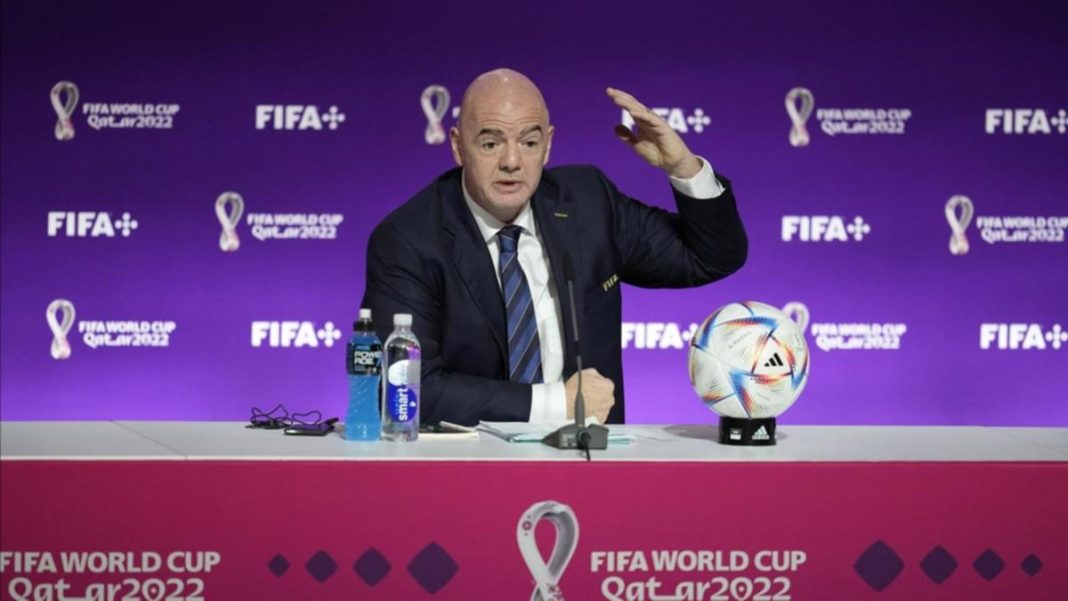 West News Wire: A few hours before the World Cup begins in Qatar, FIFA President Gianni Infantino criticized Western nations for their “hypocrisy,” claiming they were not in a position to provide “moral lessons” to other countries.

The Swiss Italian remarked during a tense press conference in the Qatari capital on the eve of the competition that Europe should confront its prior transgressions before criticizing Qatar.

“I’m from Europe. Before beginning to teach people moral lessons, we Europeans should first apologize for what we have done to the globe over the past 3,000 years, Infantino told hundreds of reporters on Saturday.

Qatar, which won the privilege to host the world football championship in 2010, has come under fire for how it handles migrant workers and human rights record.

“I came here six years ago and addressed the matter of migrant workers straight on, in my very first meeting,” Infantino said, pausing and looking straight at the gathered journalists.

“How many of these European or Western business companies, who earned millions and millions from Qatar and other countries in the region billions every year how many of them addressed the rights of migrant workers with the authorities?

“I have the answer for you. None of them,” the FIFA chief said, adding “the one-sided moral lesson is just hypocrisy.”

Homosexuality is illegal in the country, but Qatar has said all fans are welcome to attend the showpiece event.

“I have been speaking about this topic with the highest leadership of the country. Several times, not just once. They have confirmed, I can confirm, that everyone is welcome,” the FIFA president said.

In remarks to reporters at the end of the news conference, FIFA media chief Bryan Swanson, who is gay, insisted everyone is welcome in Qatar.

“I’ve seen a lot of criticism of Gianni Infantino since I’ve joined FIFA, in particular from the LGBTQ community,” Swanson said.

“I’m sitting here in a privileged position on a global stage as a gay man here in Qatar. We have received assurances that everybody is welcome and I believe that everybody will be welcome in this World Cup,” he added.

Critics also questioned Qatar, the first country in the Arab world to host the competition, for banning the sale of alcohol inside stadiums during the tournament.

“Every decision that is taken in this World Cup, it is a joint decision between Qatar and FIFA. Every decision is discussed, debated and taken jointly. There will be, I don’t know how many, fan zones eight, 10, big fan zones, over 200 places where you can buy alcohol,” Infantino said.

He also pointed out this was not unusual as drinking inside football stadiums is banned in major European nations such as France, Spain, Portugal and Scotland.

Infantino praised the “commercial success” of this year’s World Cup despite some detractors urging businesses to boycott the event.

And compared to the previous World Cup, we have around 200 to 300 million more rights to tickets and hospitality.

On Sunday, Ecuador will be the opponent for Qatar in the tournament’s opening match. Infantino claimed that the Gulf nation’s preparation for the matches had been remarkable.

Doha is prepared. Qatar is equipped. Of course, it will be the best World Cup ever, he remarked.