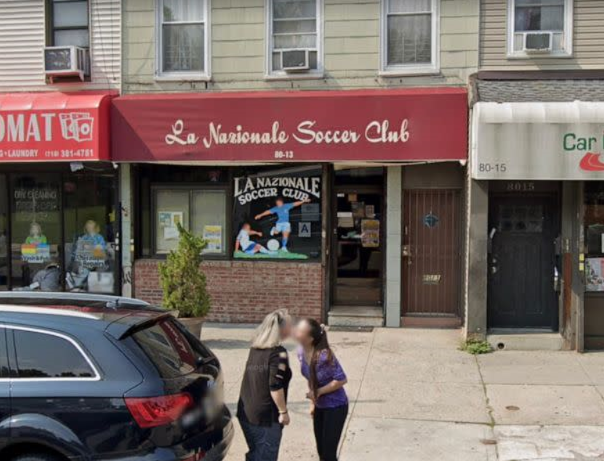 Federal prosecutors in Brooklyn claimed that the Genovese organized crime family ran an illegal gambling operation out of the store, bringing in “substantial revenue” that was then laundered through cash transfers.

Nine alleged members and associates of the Genovese and Bonanno organized crime families were accused of operating illegal gambling parlors out of other seemingly legitimate Queens and Long Island businesses, including a coffee shop and the La Nazionale Soccer Club, on Tuesday.

58-year-old Salvatore Rubino, also known as “Sal the Shoemaker,” was detained, according to the prosecution.

A Nassau County police detective, Hector Rosario, is also among the defendants. He allegedly accepted money from the Bonanno family in exchange for offering to arrange police raids of competing gambling locations, according to the indictment. He is charged with obstructing a grand jury investigation and lying to the FBI.

“Current members of the five families demonstrate every day they are not adverse to working together to further their illicit schemes, using the same tired methods to squeeze money from their victims. Enlisting alleged assistance from a member of law enforcement also proves they are willing to do all they can to hide their illegal behavior,” FBI Assistant Director-in-Charge Michael Driscoll said in a statement.

Beginning in May 2012, the Genovese and Bonanno families jointly operated a lucrative illegal gambling operation in Lynbrook, New York, called the Gran Caffe. The profits earned through this and other gambling locations generated substantial revenue, which was then laundered through cash transfers to the defendants and through “kicking up” to the crime families’ leaders, the indictment said.

“Today’s arrests of members from two La Cosa Nostra crime families demonstrate that the Mafia continues to pollute our communities with illegal gambling, extortion, and violence while using our financial system in service to their criminal schemes,” U.S. Attorney for the Eastern District of New York Breon Peace said in a statement.

Among those charged are Anthony “Little Anthony” Pipitone, a captain and soldier in the Bonanno family, and Carmelo “Carmine” Polito, acting captain in the Genovese family, prosecutors said.

Prosecutors detail one call Polito made in October 2019 to an associate asking him to relay a message to a debtor: “Tell him I’m going to put him under the bridge.”