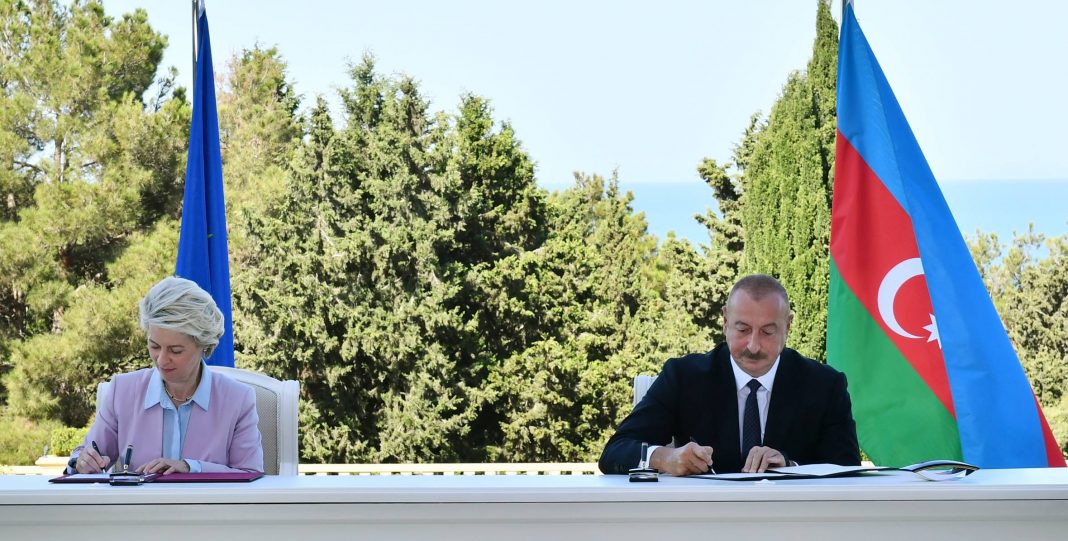 West News Wire: By 2027, the European Commission and Azerbaijan agreed to increase their natural gas imports from that country by at least 20 billion cubic meters (bcm).

Ursula von der Leyen, president of the European Commission, said on Monday, “Today, with this new memorandum of understanding, we are opening a new chapter in our energy cooperation with Azerbaijan, a critical partner in our efforts to diversify away from Russian fossil fuels.

She claimed that in an effort to find non-Russian suppliers in the wake of Moscow’s invasion of Ukraine, the European Union wants to boost its gas imports from Azerbaijan.

At a joint news conference with Azerbaijan’s President Ilham Aliyev after the signing ceremony in Baku, von der Leyen stated, “Azerbaijan is a critical energy partner for us and has always been trustworthy.”

The Azeri gas imports will already increase to 12bcm next year, which “will help compensate for cuts in supplies of Russian gas and contribute significantly to Europe’s security of supply,” she added.

Aliyev stressed that “issues of energy security today are more important than ever before”.

He added: “Long-lasting, predictable and very reliable cooperation between EU and Azerbaijan in the field of energy is a big asset.”

The Southern Gas Corridor transporting Azeri gas to the EU has been operational since 2020.

Natural gas supplies have emerged as a weapon between Russia and Europe since Moscow’s February 24 invasion of Ukraine.

Ahead of the visit, the European Commission said: “Amid Russia’s continued weaponisation of its energy supplies, diversification of our energy imports is a priority for the EU.”

In May, EU leaders agreed to stop most Russian oil imports by the end of the year, as part of unprecedented sanctions they slapped on Moscow over the military action in Ukraine.

But the bloc put off an outright ban on Russian gas, which in 2021 amounted to 155bcm nearly 40 percent of the EU’s needs.

Meanwhile, the International Energy Agency Director Fatih Birol warned on Monday that Europe’s efforts to diversify suppliers will not be enough to get it through winter without Russian gas, and urged immediate efforts to cut demand.

“It is categorically not enough to just rely on gas from non-Russian sources these supplies are simply not available in the volumes required to substitute for missing deliveries from Russia,” Birol wrote in an article published by the IEA.

“This will be the case even if gas supplies from Norway and Azerbaijan flow at maximum capacity, if deliveries from North Africa stay close to last year’s levels, if domestic gas production in Europe continues to follow recent trends, and if inflows of LNG [liquefied natural gas] increase at a similar record rate as they did in the first half of this year.”