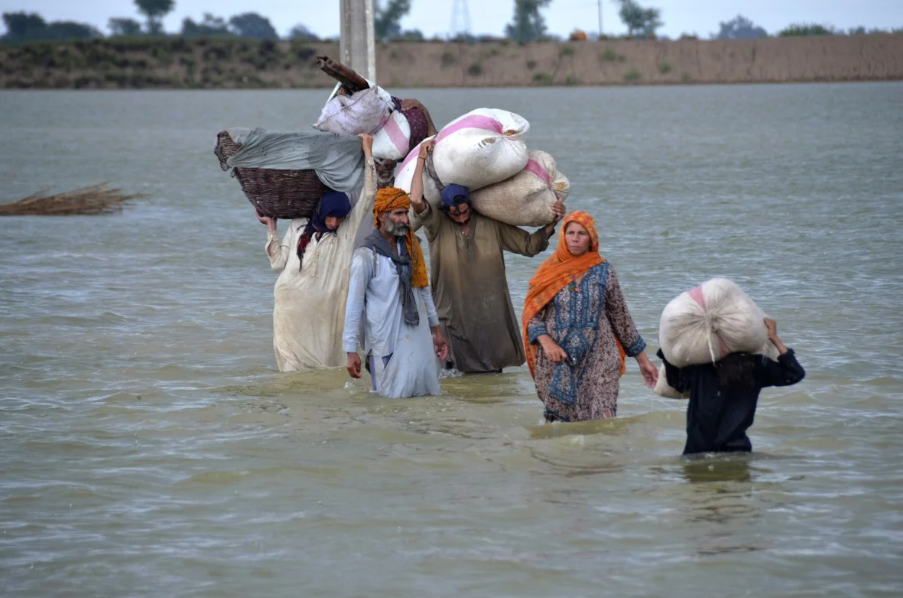 West News Wire: More than 240,000 people in the southern province of Sindh remain homeless, according to a UN assessment of Pakistan’s disastrous floods, and satellite photos show that over eight million people are “potentially exposed to flooding or living close to flooded areas.”

At least 12 districts continue to report standing water, 10 of which are in Sindh and two are in Balochistan, according to the situation report by the UN’s Office for the Coordination of Humanitarian Affairs (OCHA), which was published on Tuesday.

More than 1,700 people were killed and 33 million people were affected by the disastrous floods that Pakistan experienced this summer as a result of torrential monsoon rains and melting glaciers submerging one-third of the nation.

Houses, roads, bridges and rail networks were washed away, with the government estimating the total damage at more than $30bn.

The UN report says while receding water has allowed millions to return home, they continue to face acute shortages of essential items such as food and medicine. It adds that the flood-hit regions are now tackling health-related challenges, though the numbers are showing a declining trend.

Citing data from the World Health Organization (WHO), the UN report said cases of malaria have declined by 25 percent in Balochistan, 58 percent in Khyber Pakhtunkhwa and 67 percent in Sindh since early September.

The report added that a high number of malaria and cholera cases are still being reported from Sindh and Balochistan provinces, highlighting the “underlying vulnerabilities” in those regions.

The UN report further said more than 600,000 children in Pakistan have not received a single polio vaccine because of a lack of access to areas devastated by the floods. Pakistan remains one of the two countries in the world, along with Afghanistan, that is yet to be declared polio free.

The report also highlighted the food security situation in Pakistan. Quoting figures from the World Food Programme (WFP), another UN body, it said the highest food-insecure population was recorded in Sindh (3.9 million) and Balochistan (1.6 million).

“Evidence from available data indicates that relief response to date has fallen well short of the need, with over 5.1 million people now experiencing IPC 4 conditions in flood-affected areas,” it said, adding that an additional 1.1 million could fall in the same category by early 2023.

Phases four and five of the IPC’s classification of acute food insecurity distinguish between various degrees of food insecurity, with phase four designating an emergency and phase five a catastrophe or famine.

An expert on rights-based development and a former Special Rapporteur for OCHA, Farida Shaheed, told news reporters that the government’s emergency response to this year’s floods lacked a long-term strategy.

“The destruction is on an enormous magnitude. It cannot be resolved in a few months or a year. People have lost their houses, their livelihoods, their crops, and their livestock. I haven’t noticed anything being done by the administration with a long-term perspective,” she claimed.