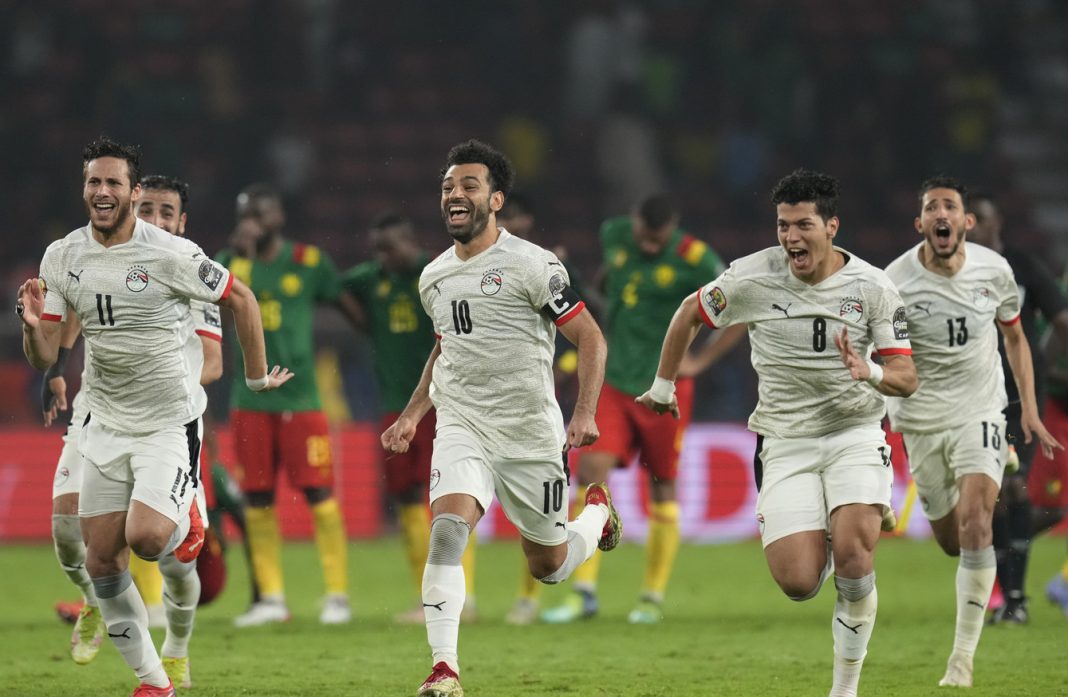 West News Wire: Egypt beat Cameroon 3-1 in a penalty shoot-out to reach the final of the Africa Cup of Nations after a goalless draw after extra time. Goalkeeper Mohamed Abou Gabal made two stunning saves.

Cameroon only converted one of their four penalty penalties in the semi-final on Thursday, with Abou Gabal blocking two of them and Clinton Njie missing his. Egypt scored on all three of their penalty kicks, and star player Mohamed Salah – who is normally Egypt’s fifth penalty taker – was not required to secure victory.

When Egypt takes on Senegal in the AFCON final on Sunday, they will be aiming for a record-extending eighth trophy.

But they will be without coach Carlos Queiroz, who is suspended for the final after being sent off in Thursday’s second half for constantly bickering with the referee.

The match itself delivered a few highlights, played on a heavy pitch that sapped the energy out of the players.

But Egypt could have won in dramatic style in the last minute of extra time when Ramadan Sobhi whipped in a cross from the right that had three teammates attempting to get on the end of it but all missing out on providing a decisive touch.

Cameroon Centre back Michael Ngadeu Ngadjui had the best chances of a first half that was low on tempo, high on ball turnover, and short on opportunity.

The big defender hit the crossbar with a header from a corner after 18 minutes and then miscued an opportunity along the ground from the set-piece that followed straight after.

Karl Toko Ekambi might have also found the net in the first period for the hosts but his 32nd minute effort lacked power and looped up for goalkeeper Abou Gabal to comfortably catch.

A rasping second half strike from Samuel Oum Gouet also shaved the Egypt bar but the game seemed destined for penalties as both sides failed to put together any effective passing moves.

Sunday’s final will see Salah come up against his Liverpool teammate Sadio Mane, with the Pharaohs chasing a record-extending eighth African crown while Senegal continue their search for their first title.

“We are very proud of our achievement today but there is one more step to go,” said Egypt assistant coach Diaa al-Sayed said.

Cameroon must still get through a third-place playoff against Burkina Faso this weekend.

“We are sad, and so are 27 million Cameroonians, but that’s football,” said coach Toni Conceicao.

The defeat comes as a big blow to the hosts, whose troubled tournament was overshadowed by the stadium crush that led to eight deaths last week.

Thursday’s match was the first game back at the Olembe Stadium since last week’s tragedy.

The Confederation of African Football moved one of the weekend quarter-finals from the venue while seeking assurances of improved security from the Cameroonian authorities.

Many fans were clearly put off returning to Olembe so soon after the tragedy, with just 24,371 present in the 60,000-seat venue  many more could have attended even with COVID restrictions limiting crowds to 80 percent of capacity.

The lack of fans was a shame in what is a football-mad country, and Cameroon and Egypt are the two most successful sides in AFCON history  the Indomitable Lions’ tally of five titles is bettered only by the Pharaohs.

After their victory, Egypt called on Africa Cup of Nations organisers to delay this weekend’s final at the Olembe Stadium against Senegal to give them more time to prepare.

“I want to state to all CAF authorities that Senegal have one extra day to train and therefore maybe we should play the final on Monday,” suggested Egypt’s assistant coach al-Sayed.