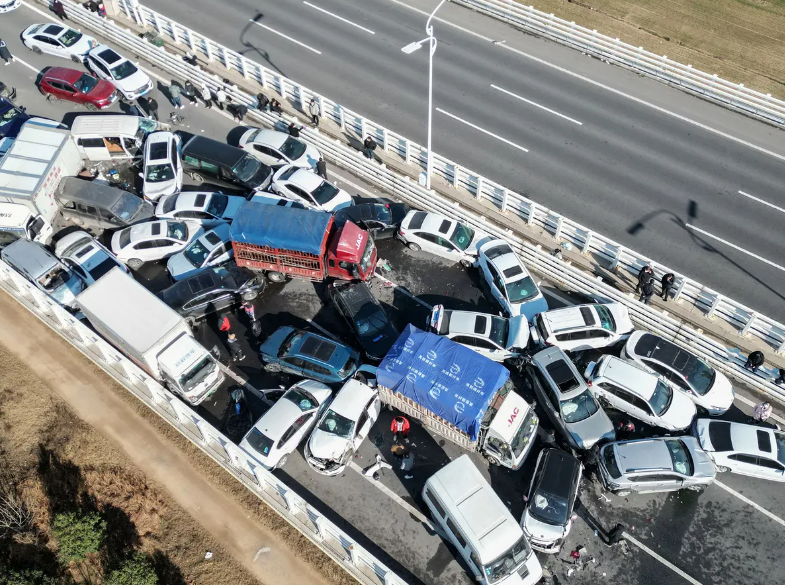 West News Wire: One person was killed on Wednesday in a significant collision involving more than 200 cars on a bridge in the Chinese city of Zhengzhou, according to local authorities. Rescuers and the state broadcaster CCTV say they believe that the disaster was brought on by unusually foggy weather and ice roads.

Several automobiles and trucks are stacked up on the Zhengxin Huanghe Bridge in photos and video from the collision that have been making the rounds on social media. Some of the occupants of the vehicles look to be trapped inside.

“This is too frightful. One guy can be heard saying in one of the video recordings, “This place is packed with people, I don’t think we can get off the bridge.

Meteorologists have stated that visibility in a number of areas, including Zhenghzou, was less than 500 meters and in some places less than 200 meters on the morning of the incident. The extremely poor visibility coupled with icy roads is believed to be the primary cause of the crash.

The local fire department dispatched a total of 11 fire trucks and 66 rescue workers to the scene, state media reported, noting that the bridge is still being cleared and has been closed to traffic until further notice.

Zhengzhou police have so far confirmed rescuing 11 people trapped in their cars and reported that one person died in the incident. No official statements regarding casualties or injuries have yet been released.