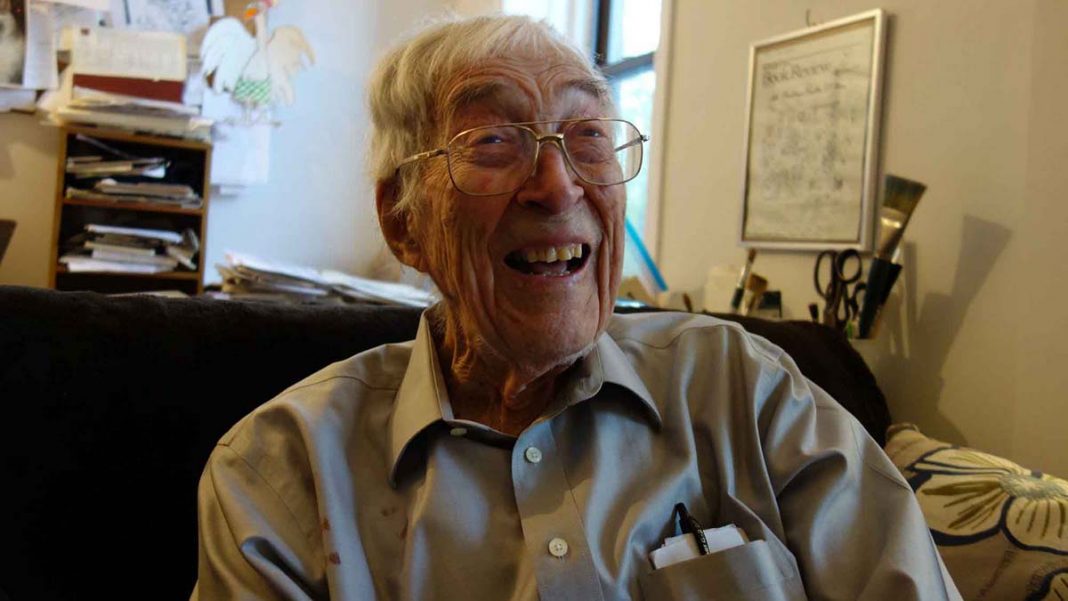 West News Wire: The New Yorker’s award-winning cartoonist George Booth, who caught with manic compassion the ageless comedy of dogs, cats, and the people who are apparently responsible for their well-being, has passed away. He was 96.

Booth passed away in New York City on Tuesday, according to a representative for the New Yorker. Dementia complications were the root of the problem.

The New Yorker published George Booth’s first sketch in 1969, and for decades after that, his works filled the publication with a kind of wild delight “Editor of The New Yorker David Remnick made a comment. “He built a remarkable world one that was entirely his own through his many illustrations and book covers that was chaotic, bizarre, and beyond funny.

Booth’s pen-and-ink sketches often depicted farcical domestic settings, such as a dog deliriously rolling on a kitchen floor and a frazzled looking husband and wife at a table nearby. The caption reads: “Don’t give the dog any more coffee.” Booth also uses a couple at the kitchen table, with a cat perched between them, for a sprawling portrait that throws in a rowboat, various buckets and tools and a chair hanging from the wall. The man is explaining to his downcast spouse: “The way I see it, Wendy, you only go around once.”

Among his most popular images was a scowling, squatting bull terrier, with a lawn sign nearby reading “BEWARE! Skittish Dog!”

Booth’s work was compiled into several books, among them “Think Good Thoughts About a Pussycat” and “About Dogs.” He also completed children’s stories, drew greeting cards and advertisements and designed a poster for the film “Ed and His Dead Mother.” A documentary about Booth, “Drawing Life,” was released early in 2022.

His honors included a lifetime achievement award from the National Cartoonists Society.

Booth, a native of Cainsville, Missouri, drew his first cartoon at age 3 and later was influenced by the slapstick comedy of the Marx Brothers and Laurel and Hardy among others. He was drafted into the U.S. Marine Corps during World War II and eventually became a cartoonist for the Marine magazine Leatherneck. Before starting at The New Yorker, he sold his work to Collier’s and Look and for eight years served as art director for Bill Communications Inc.

Booth died less than a week after the death of his wife, Dione, whom he married in 1958. They are survived by their daughter, Sarah Booth.