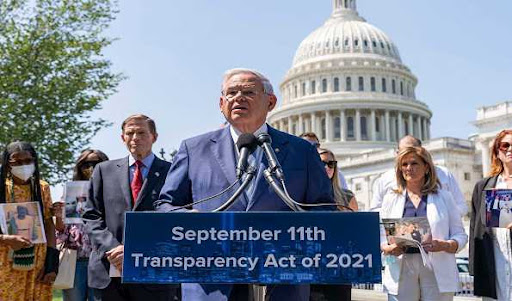 West News Wire:Democratic senators and families of victims of the 9/11 attacks called on Thursday for the Biden administration to declassify and make available key documents related to Saudi Arabia’s role in the terrorist attacks, ahead of the 20th anniversary commemorating the tragedy.

Standing outside the Capitol, Sen. Bob Menendez (D-N.J.) and Richard Blumenthal (D-Conn.) rejected reasoning that has been invoked by both Democratic and Republican White House administrations to withhold information related to Riyadh’s role in the attacks under the guise of national security.

“Let’s get real here: We’re talking about the declassification of evidence relating to an attack that took place 20 years ago — and not just any attack, an attack that claimed nearly 3,000 American lives,” said Menendez, who chairs the Senate Foreign Relations Committee.

“If the United States government is sitting on any documents that may implicate Saudi Arabia or any individual or any country in the events of Sept. 11, these families, and the American people, have a right to know.”

Menendez and Blumenthal are co-sponsors of the September 11th Transparency Act of 2021. The bill, introduced Thursday, would require the Office of the Director of National Intelligence (ODNI) to oversee a full declassification review of the government’s investigation of the 9/11 attacks.

Families of the victims of the 9/11 attacks are seeking government documents related to Saudi Arabia’s role in aiding or financing any of the 19 individuals associated with the terrorist group al Qaeda and who carried out the devastating attack on the twin towers of the World Trade Center in lower Manhattan, the Pentagon, and the downing in Pennsylvania of a hijacked flight.

The families are party to a lawsuit against Saudi Arabia alleging Riyadh’s involvement in organizing the attack and are calling out the Department of Justice and the FBI for continuing to block the release of key intelligence related to the Kingdom’s connection under the guise of the “states secret privilege.”

“These families have mounted a legal struggle against the Kingdom of Saudi Arabia and now their struggle is not only against the Saudis, it is against their own government that is continuing to conceal evidence necessary for them to have that fair day in court,” said Blumenthal, a member of the Senate Judiciary Committee.

“There has been no explanation or justification for their invoking classification, or the [State Secrets Protection Act]. And let me just be very blunt, embarrassment to the Saudi government is not a legal justification,” he added.

Read More
War on terrorism: After 20 years, a new chapter starts for the families of 9/11

Schumer, speaking at the press conference on Thursday, said that he would “fight as hard as I can to see that this outstanding piece of legislation becomes law.”

“I don’t care what the relationship is with Saudi Arabia or any other country. If they did something that is bad and horrible, that should be brought to account,” Schumer said.

Schumer further recounted visiting ground zero of the collapsed twin towers in the aftermath of the attack along with then-New York Democratic Sen. Hillary Clinton.

“Before we even got to the rubble we could smell the death in the air, where thousands of people standing in line, holding pictures … ‘Have you seen my daughter, Mary, have you seen my brother, John,’” the senator recounted. “I’ll never forget that.”

Families of the victims of the 9/11 attacks expressed deep frustration and anger at the federal government for ongoing obstruction in making available information for their case against Saudi Arabia, warning of “shallow” words to never forget the atrocities of that day as the 20th anniversary approaches.

“They stand up and utter words, ‘never forget,’ but the administration, behind a cloak of secrecy, continues to stab us in the back,” said Brett Eagleson, National Co-Chair of 9/11 Community United and whose father died in the twin towers.

“It’s a sad truth to know that the United States government values foreign interests more than its own citizens.”

Yet the families, advocates and senators expressed home that the legislation, the 9/11 Transparency Act, will spur the administration to respond.

“Twenty years is far too long to go for anybody, for us especially but for Americans in general, to go without knowing the truth,” Eagleson said.

“And I have all the confidence in the world that we’re finally going to cross the finish line on the 20th year anniversary. The families can finally get the closure that they deserve.”