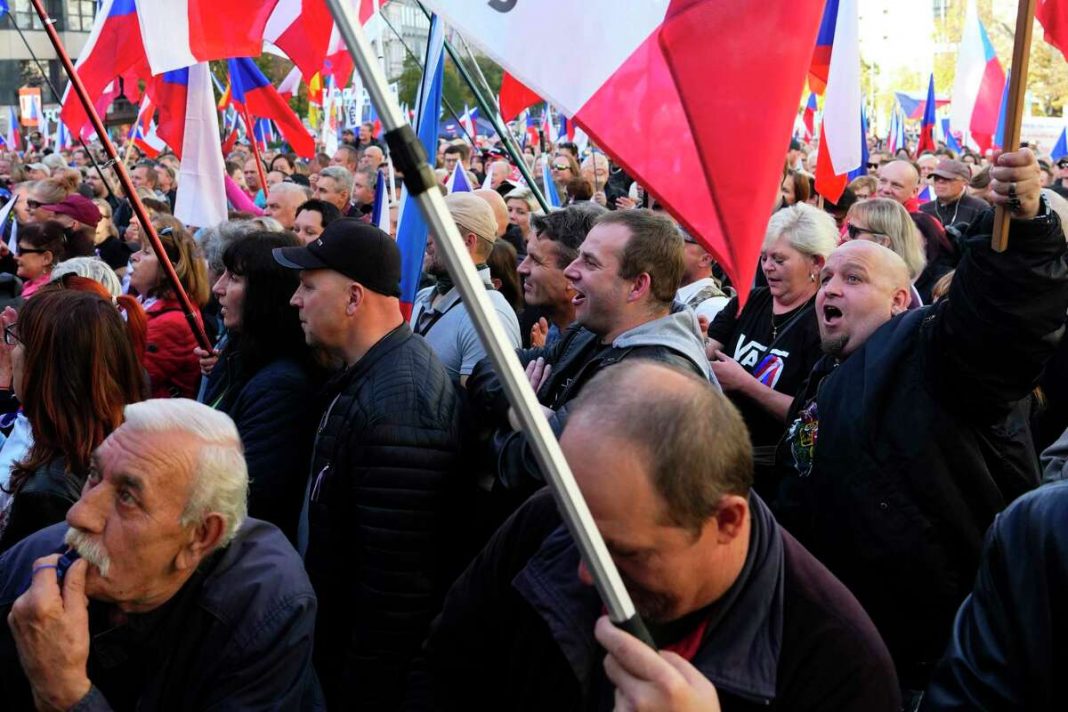 West News Wire: On Friday, a national holiday, tens of thousands of Czechs protested in the capital against the pro-Western administration and its backing of the Russian invasion of Ukraine.

According to police estimates, the rally was fewer than the 70,000 people who gathered on September 3 for the same reasons and followed two others at Prague’s main Wenceslas Square.

The rally, which brought together the far right, the far left, and different fringe groups, was held under the banner “The Czech Republic first,” an allusion to the nationalist platform of former President Donald Trump. The group’s leaders are well recognized for their support of Russia and opposition to COVID-19 vaccinations.

The demonstrators demanded the resignation of the coalition government led by conservatives because of the country’s rising energy, food, and housing prices.

“Resign!” they chanted while waving the national flags.

The protesters have repeatedly condemned the government for its support of Ukraine and the European Union sanctions against Russia, opposed Czech membership in the EU, NATO and other international organizations such as the United Nations and the World Health Organization, .

“Russia’s not our enemy, the government of warmongers is the enemy,” one speaker said.

A smaller rally was held in the country’s second-largest city of Brno.

The government has dismissed those demands.

Czechia has been a staunch supporter of Ukraine, donated heavy weapons to the Ukrainian army and given about 450,000 visas to Ukrainian refugees that give them access to health care, financial help, work permits and other benefits.

Fiala and several ministers were planning to travel to Kyiv on Monday for a joint meeting of the Czech and Ukrainian governments.

“We intensively support the justified fight of the Ukrainian people against the Russian aggression,” Fiala said Saturday.

Although the country’s populist opposition made some gains in the municipal election last month, the five ruling coalition parties won big in the vote earlier this month for one-third of the seats in Parliament’s upper house, the Senate.