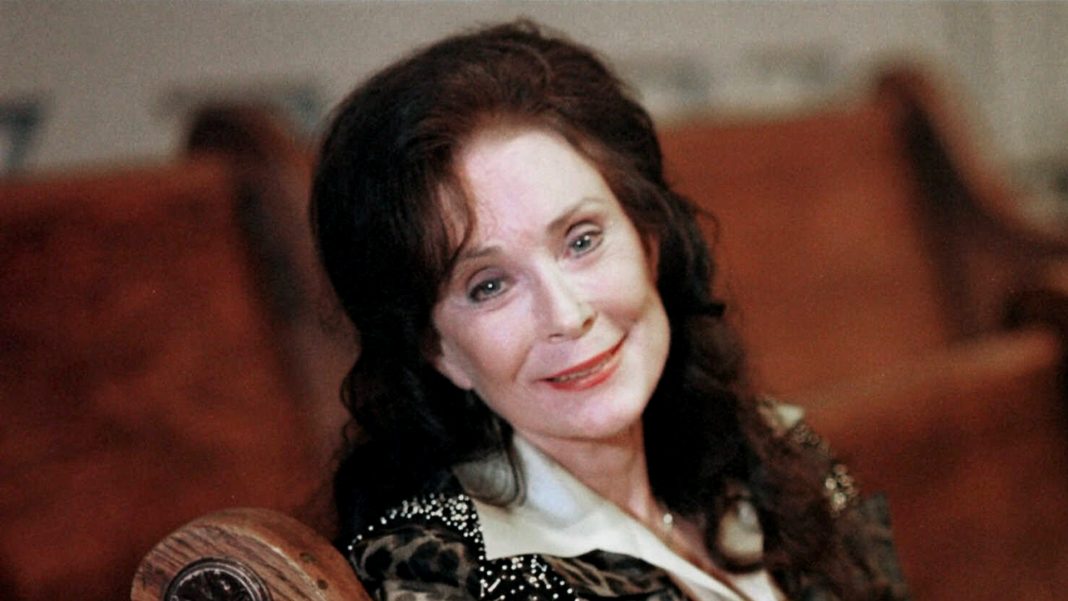 West News Wire: The daughter of a coal miner from Kentucky named Loretta Lynn, whose candid songs about love and life as a woman in Appalachia lifted her out of poverty and made her a major figure in country music, has passed away. 90 years old.

Lynn’s family announced in a statement given to The Associated Press that she passed away on Tuesday at her home in Hurricane Mills, Tennessee.

The family released a statement saying, “Our lovely mom, Loretta Lynn, passed away peacefully this morning, October 4th, in her sleep at home in her beloved ranch in Hurricane Mills.” They requested privacy while they mourned and indicated that a memorial service would be planned later.

Before beginning her career in the early 1960s, Lynn had four kids already, and her songs showcased her pleasure in her rural upbringing.

As a songwriter, she crafted a persona of a defiantly tough woman, a contrast to the stereotypical image of most female country singers. The Country Music Hall of Famer wrote fearlessly about sex and love, cheating husbands, divorce and birth control and sometimes got in trouble with radio programmers for material from which even rock performers once shied away.

Her biggest hits came in the 1960s and ’70s, including “Coal Miner’s Daughter,” “You Ain’t Woman Enough,” “The Pill,” “Don’t Come Home a Drinkin’ (With Lovin’ on Your Mind),” “Rated X” and “You’re Looking at Country.” She was known for appearing in floor-length, wide gowns with elaborate embroidery or rhinestones, many created by her longtime personal assistant and designer Tim Cobb.

Her honesty and unique place in country music was rewarded. She was the first woman ever named entertainer of the year at the genre’s two major awards shows, first by the Country Music Association in 1972 and then by the Academy of Country Music three years later.

“It was what I wanted to hear and what I knew other women wanted to hear, too,” Lynn told the AP in 2016. “I didn’t write for the men; I wrote for us women. And the men loved it, too.”

In 1969, she released her autobiographical “Coal Miner’s Daughter,” which helped her reach her widest audience yet.

“We were poor but we had love/That’s the one thing Daddy made sure of/He shoveled coal to make a poor man’s dollar,” she sang.

“Coal Miner’s Daughter,” also the title of her 1976 book, was made into a 1980 movie of the same name. Sissy Spacek’s portrayal of Lynn won her an Academy Award and the film was also nominated for best picture.

Long after her commercial peak, Lynn won two Grammys in 2005 for her album “Van Lear Rose,” which featured 13 songs she wrote, including “Portland, Oregon” about a drunken one-night stand. “Van Lear Rose” was a collaboration with rocker Jack White, who produced the album and played the guitar parts.

Reba McEntire was among the stars who reacted to Lynn’s death, posting online about how the singer reminded her of her late mother. “Strong women, who loved their children and were fiercely loyal. Now they’re both in Heaven getting to visit and talk about how they were raised, how different country music is now from what it was when they were young. Sure makes me feel good that Mama went first so she could welcome Loretta into the hollers of heaven!”

Born Loretta Webb, the second of eight children, she wrote that her birthplace was Butcher Holler, near the coal mining company town of Van Lear in the mountains of east Kentucky. She literally put the place on the map, according to Peter Cooper, senior director, producer and writer at the Country Music Hall of Fame and Museum. He wrote in his 2017 book “Johnny’s Cash and Charley’s Pride: Lasting Legends and Untold Adventures in Country Music” that she made up the name for the purposes of the song based on the names of the families that lived there.

Her daddy played the banjo, her mama played the guitar and she grew up on the songs of the Carter Family. Her younger sister, Crystal Gayle, is also a Grammy-winning country singer, scoring crossover hits with songs like “Don’t It Make My Brown Eyes Blue” and “Half the Way.” Lynn’s daughter Patsy Lynn Russell also was a songwriter and producer of some of her albums.