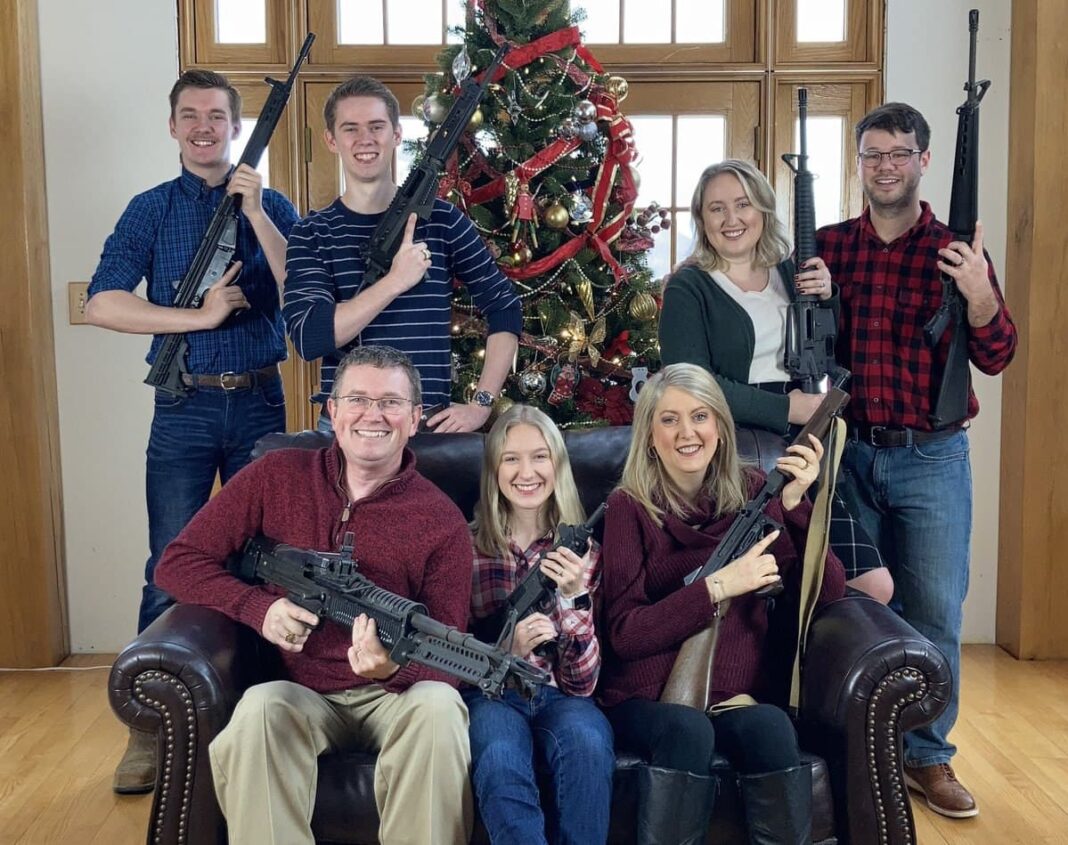 West News Wire: Rep. Thomas Massie, a pro-gun Republican lawmaker from Kentucky, is being criticized for posting a photo to social media that shows his family holding powerful guns, just four days after a teenager killed four students at Oxford High School in Michigan. In that attack, the shooter used a gun his father had bought as an early Christmas gift for his son.

In the picture, Massie and his wife, Rhonda, pose along with their family, all holding weapons in front of a Christmas tree. The image has drawn tens of thousands of “likes.” But while some users’ replies were supportive, others were scathing.

“I promise not everyone in Kentucky is an insensitive a**hole,” Democratic Rep. John Yarmuth, who is also part of the state’s congressional delegation, wrote.

Massie published the message on Saturday, the same day the parents of Ethan Crumbley were arraigned on involuntary manslaughter charges over the school shooting in suburban Detroit. They’re accused of not securing the deadly weapon; prosecutors also say they refused to take their son out of school shortly before the shooting — and that they didn’t tell officials about their son’s new gun, despite concerns raised by school officials.

The photo set off a strong reaction

Many commenters said it was insensitive for Massie to post an image celebrating guns at Christmas, including one who asked, “Maybe you should talk to the parents of these murdered children and the victims who survived to see if they think this is cute.”

One of the most-liked responses made light of the image, stating, “Oh look, it’s Y’all Qaeda” — a reference to the radical extremist group Al Qaeda’s penchant for posing with rifles.

Some of the criticism came from within Massie’s own party.

“I’m pro second amendment, but this isn’t supporting right to keep and bear arms, this is a gun fetish,” Rep. Adam Kinzinger, R-Ill., who is an an Iraq War veteran, wrote in response to Massie’s message.

He stated, “since we are sharing family photos, here are mine. One is the last photo that I ever took of Jaime, the other is where she is buried because of the Parkland school shooting. The Michigan school shooter and his family used to take photos like yours as well.”

Who is Thomas Massie?

Massie, whose Twitter bio includes the tagline #sassywithmassie, is no stranger to over-the-top statements. His congressional web page highlights an interview he did with the controversial One America News Network last month, in which he said “Biden is committing violence on the American people” by issuing a vaccine mandate to combat the COVID-19 pandemic. He has also called the mandates “tests to see if we are obedient subjects of the people who direct him.”

Massie has served in Congress since 2012. He represents Kentucky’s 4th congressional district, in the northern portion of the state. Massie is seeking reelection in 2022 and faces a primary vote in May.

Massie has embraced gun rights and libertarian positions since his first years in Congress, even when that stance has put him farther to the right than other members of his own party.

In March of 2020, Massie drew the ire of then-President Trump, after the Kentucky lawmaker tried to delay a final decision on a $2 trillion coronavirus relief bill by requesting an in-person roll call vote rather than a simple voice vote.
He has a history of opposing limits on guns

In 2013, Massie proclaimed that he was the sole “No” vote in Congress on a move to extend the Undetectable Firearms Act of 1988 for another 10 years.

As member station WFPL reported at the time, the bill “bans the possession, manufacturing and selling of any so-called plastics gun, which can be built using 3-D printers and can go undetected by security devices.” The House held a voice vote on the legislation; the Senate approved it by unanimous consent.

In another early departure from his Republican colleagues, Massie was one of just three representatives who voted against the Stolen Valor Act, which made it a federal crime for someone to lie about receiving a military award, such as the Purple Heart or Bronze Star, for their own gain. Massie opposed the bill because he “felt it duplicated another federal law,” according to the Cincinnati Enquirer.

In more recent years, Massie has repeatedly introduced bills to abolish the U.S. Department of Education, as well as supporting the dismantling of the Environmental Protection Agency.