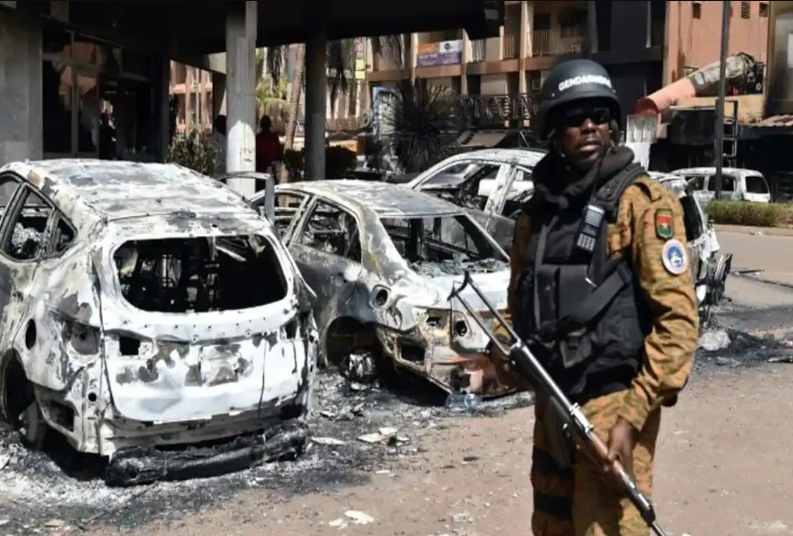 According to Rodolphe Sorgo, the governor of the northeastern Sahel region, which borders Mali and Niger, the explosion, which left 37 other people injured, happened on Monday while the military-escorted convoy was traveling down the road from Bourzanga to Djibo.

Over the past ten years, the tri-border area has played a key role in the region’s spiraling security problem. Following military coups in Mali and Burkina Faso in May 2021 and January 2022, respectively, the territory has seen an increase in attacks by organizations associated to ISIL (ISIS) and al-Qaeda.

“One of the vehicles carrying civilians hit an improvised explosive device. The provisional toll is 35 dead and 37 injured, all civilians,” the regional governor’s statement said.

“The escorts quickly secured the perimeter and took measures to help the victims,” the statement said.

A resident in Djibo told AFP that “several dozen vehicles, including trucks and public transport buses” were hit by the blast.

“The victims are mainly traders who were going to buy supplies in Ouagadougou and students who were returning to the capital for the next school year,” the resident, who wished to remain anonymous, told the news agency, referring to the country’s capital.

The explosion follows a string of attacks on main roads leading to the region’s main cities, Dori and Djibo.

In early August, at least 15 soldiers were killed in the area by a double IED blast. In June, at least 86 civilians were killed by armed attackers in the northern town of Seytenga.

Burkina Faso’s military rulers have branded fighting armed groups in the northern and eastern regions of the country a top priority, with the army saying it has undertaken “offensive actions” and also initiated a process of dialogue with certain armed groups, through religious and local leaders.

Still, the Armed Conflict Location and Event Data Project (ACLED) has documented more attacks this year in Burkina Faso than in Niger or Mali, where the security crisis was first triggered by an ethnic separatist movement in the north in 2012, followed by the rise of various armed groups in the central border region.

On Sunday, AFP reported that military leaders in Mali and Burkina Faso have agreed to strengthen their military partnership to combat armed groups, a move that followed the withdrawal of French troops from Mali, which was completed in August, and Mali’s withdrawal from the regional G5 Sahel Joint Force, which went into effect at the end of June.

A mediator from the Economic Community of West African States, the main regional bloc, had previously reported that authorities in Burkina Faso controlled just 60 percent of the country of 20 million people’s territory.

The Norwegian Refugee Council has said nearly one in 10 people in Burkina Faso have been displaced by conflict and severe food insecurity has almost doubled compared with 2021 as fields and livestock are abandoned.