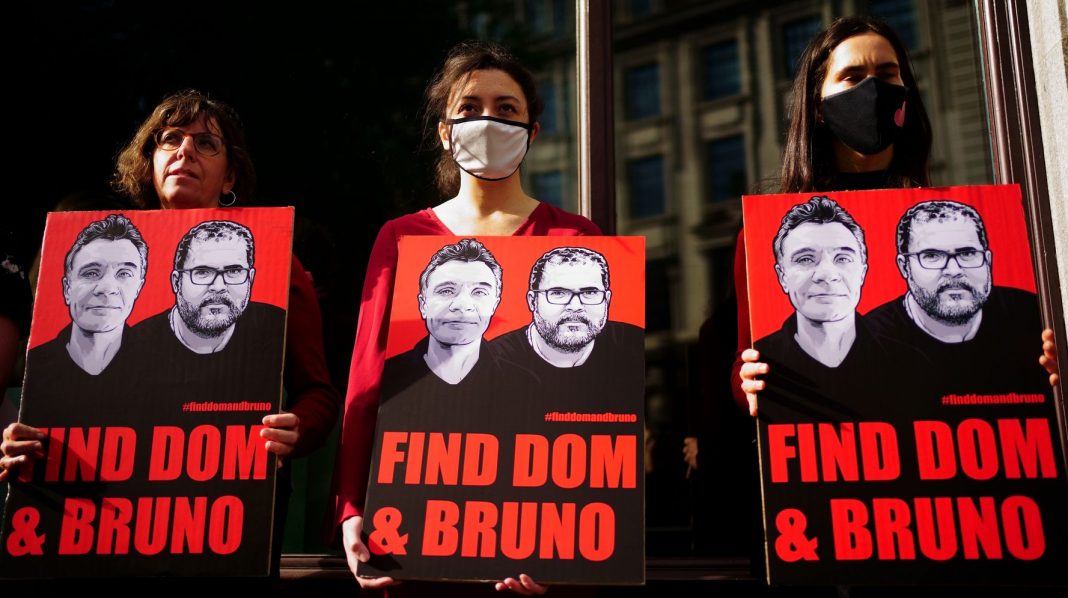 West News Wire: The killing of British journalist Dom Phillips and Brazilian Indigenous expert Bruno Pereira, a day after their bodies were discovered in a remote area of Brazil’s Amazon region where they went missing, has left his relatives “heartbroken.”

On Wednesday night, Brazilian police announced that they had recovered human remains from a jungle grave, where they were led by a fisherman who confessed to killing the two men. The identity of the remains is still a work in progress.

Phillips’ family said in a statement on Thursday that they had been “informed that two bodies have been recovered from a remote location following a confession from one of the men in custody.”

“We are heartbroken at the confirmation that Dom and Bruno were murdered and extend our deepest sympathies to Alessandra, Beatriz and the other Brazilian family members of both men,” reads the statement, which was shared on social media.

“We are grateful to all those who have taken part in the search, especially the Indigenous groups who worked tirelessly to find evidence of the attack.”

Pereira’s wife Beatriz Matos also expressed her grief on Thursday. “Now that Bruno’s spirits are strolling in the forest and spread on us, our strength is much bigger,” she said on Twitter.

Phillips’s wife, Alessandra Sampaio, said the discovery of bodies “puts an end to the anguish of not knowing Dom and Bruno’s whereabouts”.

“Now we can bring them home and say goodbye with love,” Sampaio said in a statement. “Today, we also begin our quest for justice.”

Pereira, 41, and Phillips, 57, were last seen on June 5 on their boat in a river near the entrance of the Javari Valley Indigenous territory, which borders Peru and Colombia. That area has seen violent conflicts between fishermen, poachers and government agents.

Their disappearance fuelled concern and calls for action from around the world, with human rights groups, environmentalists, journalists and others urging Brazil’s far-right President Jair Bolsonaro to step up the search after a slow start.

Bolsonaro, who once faced tough questioning from Phillips at a news conference over weakening environmental law enforcement, said last week that the two men “were on an adventure that is not recommended”.

He also suggested that Phillips, a freelance journalist who contributed to The Guardian and other news outlets, had made enemies by writing about environmental issues.

A fisherman confessed to killing the pair and took police to a site where the human remains were recovered, a federal investigator said on Wednesday after a grim 10-day search.

Investigator Eduardo Alexandre Fontes said Amarildo da Costa de Oliveira, 41, nicknamed Pelado, told officers he used a firearm to kill the men. Indigenous people who were with Pereira and Phillips have said that Pelado brandished a rifle at them the day before the pair disappeared.

Police said earlier this week that they had arrested a second suspect in connection with the disappearance and identified him as Oseney da Costa de Oliveira, a fisherman and a brother of the initial suspect.

Police gave no immediate explanation of a motive for the killing, but earlier suggested that Pereira’s work to stop illegal fishing in an Indigenous reserve had angered local fishermen.

Efforts to find the pair were started by Indigenous peoples in the region. UNIVAJA, an Indigenous association in the Javari Valley, said in a statement on Wednesday that they mourned the loss of “two partners”, adding they only had help and protection from local police.

“Amnesty International demands justice for Bruno and Dom. Their families must have access to truth and reparations. Brazilian society needs to see an end to impunity and the absence of public policies that promote and guarantee rights,” Werneck said in a statement.

“President Jair Bolsonaro’s government cannot turn a blind eye to the crimes occurring in the Amazon, nor be complicit in them. All possible measures must be urgently taken to put an end to this cycle of violence in the Amazon. Who protects those who defend the rights of Indigenous Peoples and the Amazon? It is the Brazilian state that has this duty.”