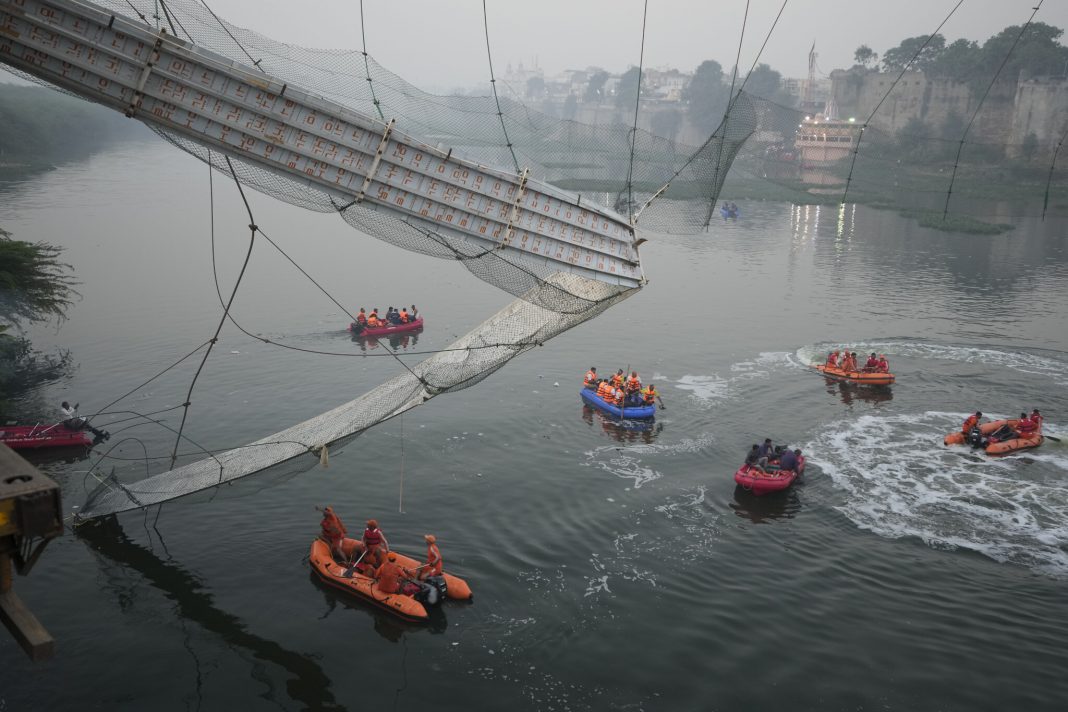 West News Wire: Officials report that 132 people have died as a result of the collapse of a colonial-era suspension bridge in the western Indian state of Gujarat, where rescuers spent the entire night searching for survivors.

The death toll increased from 68 on Sunday to 132 early on Monday, according to Gujarat’s home minister, Harsh Sanghavi, who was speaking to reporters at the time.

According to Gujarat’s Information Department, 19 individuals were undergoing medical attention while around 177 people had now been saved.

The Morbi Bridge, located in a town some 200 kilometers (120 miles) west of Ahmedabad, Gujarat’s capital, was constructed in the 19th century during British administration. It had been closed for about six months for repairs before it was reopened to the public last week.

Hundreds of sightseers celebrating Diwali, or festival of lights, and the Chhath Puja holidays, were on the 230-metre bridge when it collapsed on Sunday, according to local media.

Television footage showed dozens of people clinging onto the cables and twisted remains of the bridge as emergency teams struggled to rescue them.

Some clambered up the broken structure to try to make their way to the river banks, while others swam to safety. Several children were among the victims.

Prateek Vasava, who swam to the river bank after falling from the bridge, told 24 Hours Gujarati-language news channel that he saw several children fall into the river.

“I wanted to pull some of them along with me but they had drowned or got swept away,” he said.

The bridge collapsed in just a few seconds, he said.

Another witness, who gave his name as Sukram, told the Reuters news agency that the bridge had collapsed because it could not handle the weight of so many people.

“Many children were enjoying holidays for Diwali and they came here as tourists. All of them fell one on top of another. The bridge collapsed due to overloading,” he said.

Gujarat’s government said an investigation was underway into the cause of the disaster.

It said more than 200 rescue workers had been mobilised for the search and rescue operation.

Prime Minister Narendra Modi, who is in his home state Gujarat for a three-day visit, announced a payment of 200,000 Indian rupees ($2,428) to families of the dead.

Poland, Italy, the Netherlands, the United Arab Emirates, Sri Lanka, Armenia and others sent their condolences over the tragedy.

Italy’s Foreign Ministry expressed its “deep sorrow” and “our condolences for the victims and our utmost sympathy to their families and all the [Indian] people at this tragic time”.

The UAE said it stood in “solidarity with India”, while Sri Lanka said it was “shocked and distressed by the tragic accident in Morbi”.