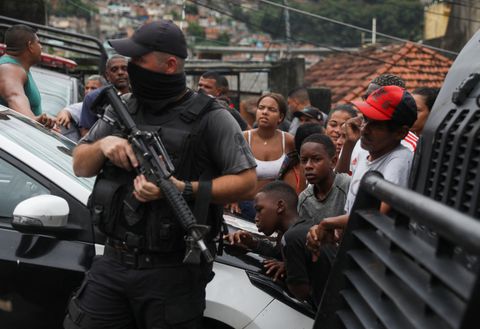 West News Wire: The latest lethal police operation in the underprivileged areas of Rio de Janeiro claimed at least 18 lives, according to state military police. The raid was conducted by Brazilian police on a vast complex of favelas in the city.

According to a police spokeswoman at a news conference, 16 of the 18 fatalities in Complexo do Alemao on Thursday are thought to be members of organized crime gangs, along with a law enforcement officer and a local resident.

Speaking under the condition of anonymity out of fear of retaliation from the government, one woman told The Associated Press news agency, “It’s a bloodbath inside, which police are calling an operation.”

“They’re not letting us help [victims],” she added, saying she saw one man arrested for attempting to do so.

Tactical teams from Rio de Janeiro’s civil and military police raided the favela to take down a group suspected of involvement in cargo theft and bank robberies, and that invaded nearby neighbourhoods, the military police said in an earlier statement.

It said about 400 officers were involved, with support from four aircraft and 10 armoured vehicles.

Thursday’s raid was the latest fatal police operation in a Rio de Janeiro favela, the likes of which have prompted concerns from rights groups for years.

In May of last year, more than two dozen people were killed in a raid in the city’s Jacarezinho favela, prompting outrage and protests among residents and spurring calls for accountability from human rights advocates and international observers.

But Brazilian President Jair Bolsonaro has defended police tactics in their fight against organised crime, saying previously that gangsters should “die like cockroaches”.

“I will continue to fight crime with all my strength. We will not back down from the mission of guaranteeing peace and security to the people of our state,” Rio state Governor Claudio Castro said on his official Twitter profile on Thursday.

But the state public defender’s office said in a statement that “there are signs of major human rights violations, and the possibility of this being one of the operations with the highest number of deaths in Rio de Janeiro”.

Alemao is a complex of 13 favelas in northern Rio that is home to about 70,000 people. Nearly three-quarters of residents are Black or biracial, according to a July 2020 study published by the Brazilian Institute of Social and Economic Analyses.

After the raid, locals could be seen bundling injured people into the back of vehicles to be taken to hospital as police watched. Gilberto Santiago Lopes, from the Anacrim Human Rights Commission, said the police refused to help.

“We had to carry them away in a beverage truck, and then flag a local resident in their car to take them to hospital,” he said. “[The police] don’t aim to arrest them, they aim to kill them, so if they’re injured, they think they don’t deserve help.”