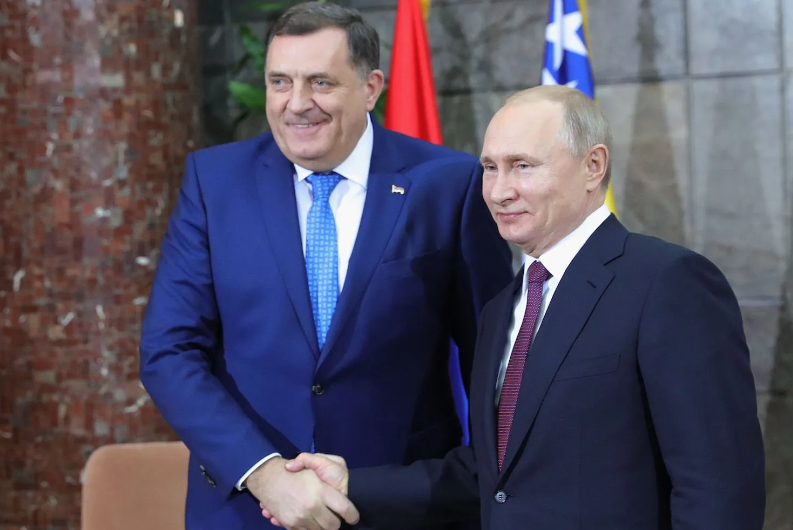 West News Wire: Milorad Dodik, the leader of the Bosnian Serb separatist movement, criticized the West and hailed Vladimir Putin for his actions in the Balkans as he campaigned this weekend. He boasted that he is a unique European politician who has access to meetings with Putin whenever he wants.

After meeting with Putin in Moscow earlier this month, when he praised Russia’s intervention in Ukraine, Dodik made his remarks at a pre-election rally late on Tuesday in the Bosnian Serb semiautonomous entity of Republika Srpska. In June, Dodik and Putin also spoke.

Dodik, a Serb who serves in Bosnia’s tripartite presidency alongside a Bosniak and a Croat, has met with Putin numerous times, particularly before elections when he wants to demonstrate to the strongly pro-Russia Bosnian Serb voters that he has Putin’s support.

During the rally, Dodik reiterated the Bosnian Serb separatist stands, which already once in the past led to a war in the 1990s when it left 100,000 people dead and millions homeless in what was then the worst carnage in Europe since World War II.

“And I think that these conditions (separation) are being created, Europe is in more and more trouble. America is losing its strength. A new world is being created, “ Dodik said. ”In that world it is important that the Republika Srpska has Milorad Dodik who can call Putin and see him tomorrow.”

Bosnia holds a general election on Sunday in which Dodik is running for the Bosnian Serb president, a separate function from the three-member presidency. His biggest challenge comes from young economist Jelena Trivic, from opposition Party of Democratic Progress, who has pledged to fight against Dodik’s alleged corruptive deals that he made in the past.

“We have the best possible relations with Russia,” Dodik said.

“Enthusiasm for the European Union is lost here.” he said. “The EU produces more problems than it brings solutions. I think that the EU has been a big fraud for us in the last 20 years.”