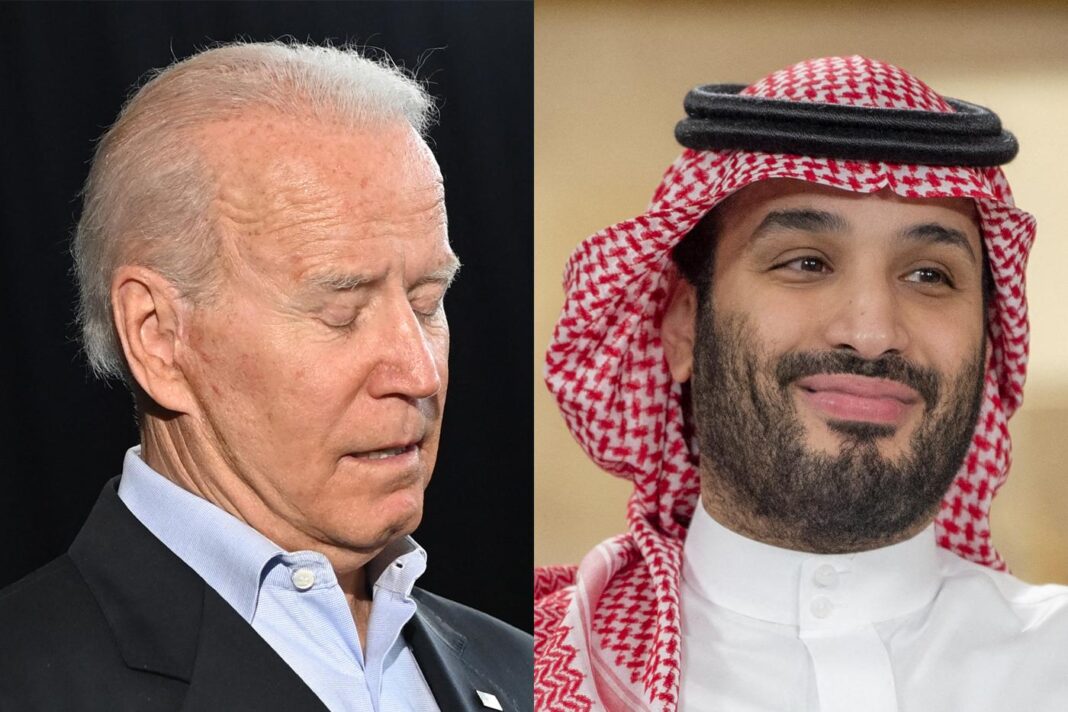 West News Wire: Shortly after taking office, when Biden spoke at the State Department, he said, “We’re also stepping up our diplomacy to end the war in Yemen — a war which has created a humanitarian and strategic catastrophe. And to underscore our commitment, we are ending all American support for offensive operations in the war in Yemen, including relevant arms sales.”

For a short time, at least, MbS, as the crown prince is known, was worried. He freed a couple of high‐​profile political prisoners and announced some legal and judicial reforms. However, that turned out to be entirely unnecessary. Biden almost immediately made a very secular turn and bow to Mecca.

He undercut his commitment on Yemen by promising to continue “defensive” aid for the Saudi royals. Yet having sown the wind by starting the war, they now were appropriately reaping the whirlwind of retaliation for their continued depredations. The State Department also pushed an outdated peace plan that required the opposition Ansar Allah, or Houthis, to essentially surrender despite having gained the battlefield advantage.

Demonstrating that, like its predecessor, it could be bought, the Biden administration proposed a new weapons sale, which would fuel the conflict. The $650 million worth of air‐​to‐​air missiles were labeled defensive weapons but will be used to protect the Saudis as they continue nearly seven years of airstrikes against civilians.

One might expect MbS to show some gratitude for the president’s retreat. After all, that was a very public acknowledgment by Washington that the KSA — a cruel, antediluvian system of absolute monarchy — is considered too important to discipline even for the most grotesque crimes. Such as turning the regime’s Istanbul consulate into an abattoir for use against American resident and journalist Jamal Khashoggi.

However, MbS obviously assessed the character of Biden & Co. and found it lacking. The result brings to mind Adolf Hitler’s striking comment on the British and French leaders before the eruption of World War II: “Our enemies are little worms. I saw them at Munich.” MbS visualized his supposed friends in Washington and treated them like little worms.

Despite the administration’s decision to go easy on the Kingdom in Yemen, last week the Saudi military announced that it was sticking around, presumably ready to commit more war crimes. Reported Reuters: “The Saudi‐​led coalition fighting the Iran‐​aligned Houthis in Yemen said on Wednesday its troops were redeploying in line with its strategy to support Yemeni forces, but were not withdrawing.” The seemingly irritated KSA military spokesman insisted that: “Movement and redeployment of troops based on operational and tactical assessment” was a standard operation “in all military forces across the world.” But usually not to kill civilians in one of the world’s poorest nations.

The Kingdom poses a special embarrassment to the president’s democracy agenda. Despite the Biden administration’s close relationship to Riyadh, Washington could not invite the Saudis to the upcoming Summit for Democracy and retain a shred of credibility. The KSA dwells near the bottom of Freedom House’s list of 210 countries and territories, judged to be “Not Free” and rating only seven points out of a possible 100.

The assessment of the Kingdom is as brutal as the latter’s treatment of Khashoggi: “Saudi Arabia’s absolute monarchy restricts almost all political rights and civil liberties. No officials at the national level are elected. The regime relies on pervasive surveillance, the criminalization of dissent, appeals to sectarianism and ethnicity, and public spending supported by oil revenues to maintain power. Women and religious minorities face extensive discrimination in law and in practice. Working conditions for the large expatriate labor force are often exploitative.”

Moreover, Riyadh has actively subverted human rights and democracy throughout the Middle East. Almost exactly four years ago MbS kidnapped Lebanon’s premier, who was released only after substantial international pressure. Among the other victims of Saudi military, economic, and/​or political warfare are the peoples of Bahrain, Qatar, Egypt, Libya, Syria, and most recently Tunisia.

When it was reported last month that Lebanon’s new information minister had criticized Riyadh and its partners in crime, including the United Arab Emirates and Bahrain, the Kingdom launched a diplomatic and economic offensive against the Lebanese people. So far Beirut has rebuffed Riyadh’s attempt to extend its control over the multi‐​religious state, but with its economy and people in crisis, Lebanon might be tempted to genuflect in return for a cash payoff.

Even more humiliating for Washington, only a couple weeks ago Riyadh rejected Washington’s request that OPEC increase oil production to moderate prices. The National Security Council at least attempted to maintain a dignified tone, insisting that “Our view is that the global recovery should not be imperiled by a mismatch between supply and demand.” Not so the president. After having adopted policies that will reduce domestic energy production, he whined: “The idea that Russia and Saudi Arabia and other major producers are not going to pump more oil so people can have gasoline to get to and from work, for example, is not right.”

Rather than show gratitude to the Biden administration for sacrificing its soul for the Kingdom, the Saudis rudely demonstrated who is in charge. They suggested that the president pound some desert sand and moved ahead as planned.

If the administration won’t act, Congress should step in. Riyadh is hardly the only terrible, repressive government which the US has tolerated and even celebrated. And Washington officials can console themselves that there is little they can do to force the regime to respect human rights. However, this is the third successive US administration to support the KSA’s aggressive war and callous killing of civilians in Yemen: Americans sold and serviced warplanes, supplied munitions, provided intelligence, and in the early years refueled Saudi aircraft. Such was Washington’s complicity that the State Department warned Americans could be held responsible for Riyadh’s brutal assault on civilians.

Bearing the greatest burden are Yemeni civilians. A quarter of a million may have died, thousands from combat action and many more from the consequences of conflict, including overall blockade and the widespread destruction of commercial facilities. All parties, including Ansar Allah, are brutal and careless of human life. However, humanitarian organizations affirm that Saudi/​Emirati attacks are responsible for two‐​thirds to three‐​quarters of the direct death and destruction. Although the Houthis have interfered with distribution of aid shipments, Riyadh and Abu Dhabi have starved the Yemeni population.

Aid organizations report that the country faces a an increasingly desperate situation. The United Nations recently reported on UN aid operations. According to UNICEF’s Henrietta Fore “2.6 million children are now internally displaced, deprived of health care, education, sanitation and safe water. Yemen’s gross domestic product (GDP) has dropped 40 per cent since 2015, and despite the availability of food, 21 million people — including almost 11 million children — require humanitarian aid.” The Under‐​Secretary‐​General for Humanitarian Affairs and Emergency Relief Coordinator, Martin Griffiths, explained “that 5 million people are one step away from succumbing to famine and the diseases that go with it, and 10 million more are right behind them.”

Yemen has been consumed by conflict for most of its six decades of modern life. There is little the US can do to resolve that tragic nation’s many challenges, including the Saudi/​Emirati invasion, if Riyadh and Abu Dhabi are prepared to pay the full cost of the war. However, Washington can, and should, stop helping turn Yemen into a humanitarian disaster.

Regarding Saudi Arabia, the Biden administration should adopt the Hippocratic Oath as policy: First do no harm. The immediate crisis is Yemen. Washington should end munitions sales to Riyadh so long as the Saudis are making war on their neighbor. If the al‐​Saud regime fears Yemeni attack, the royals could simply end their aggressive war.

That is not enough, however. The U.S. also should treat the KSA like a normal nation, ending past deference that suggested the Kingdom, rather than America, was the superpower. Washington should no longer excuse and shield the Saudi leaders from the consequences of their crimes.

Candidate Biden got Saudi Arabia right when he promised to end its preferential treatment. Unfortunately, his precipitous kowtow has emboldened Riyadh to continue business‐​as‐​usual. For reasons both principled and practical, the president should both highlight the importance of human rights generally and insist that the Kingdom of Saudi Arabia meet the same standards as other nations.