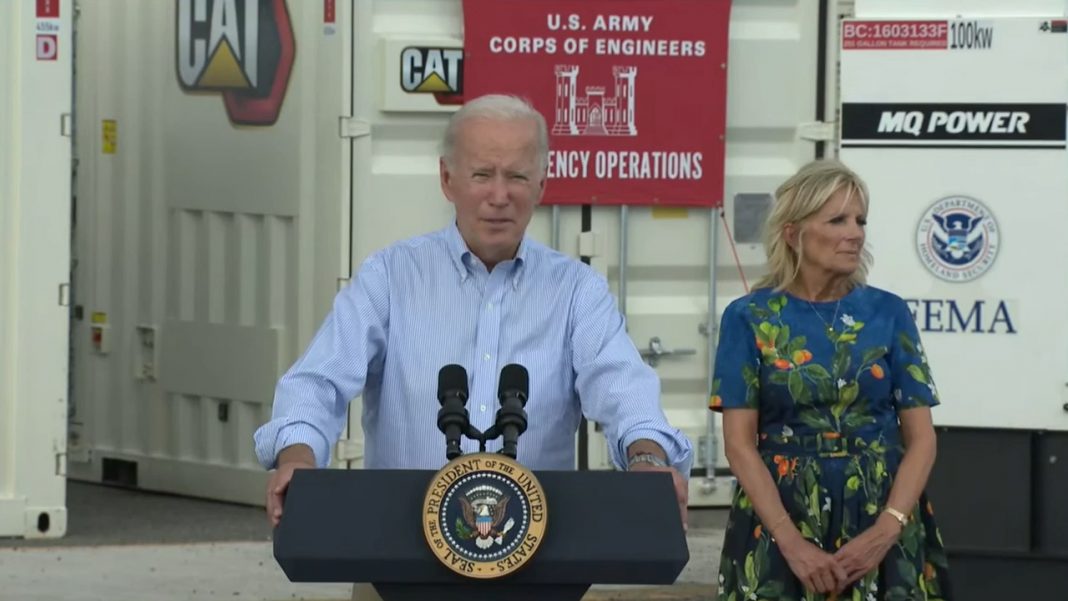 The Biden examined the effects of Hurricane Fiona, which devastated Puerto Rico last month and left more than two dozen people dead, in Ponce on the island’s south side. Deanne Criswell, the administrator of the Federal Emergency Management Agency, accompanied them as they helped load bags with food and other necessities while also visiting with families, community, and political leaders from the island.

“We physically came here to convey that America as a whole is with you as you absorb, recover, and rebuild. I’m confident to — I’m confident we’re going to be able to do all you want, governor. And I’m committed to this island,” Biden said after being introduced by Puerto Rico Democratic Gov. Pedro Pierluisi.

Biden pledged his commitment to investing in the island, “as long as it takes,” making a clear reference to former President Donald Trump’s holding up aid to the island after Hurricane Maria in 2017.

“After Maria, Congress approved billions of dollars for Puerto Rico. Much of it not having gotten here, initially. We’re going to make sure that you get every single dollar promised, and I’m determined to help Puerto Rico build faster than in the past, and stronger, and better prepared for the future.”

As he left the White House Monday morning, Biden also nodded to Puerto Rico’s past challenges with the federal government when it comes to natural disaster relief.

“I’m heading to Puerto Rico because they haven’t been taken very good care of. They’ve been trying like hell to catch up from the last hurricane. I want to see the state of affairs today and make sure we push everything we can,” he said.

“We have to ensure that when the next hurricane strikes, Puerto Rico is ready,” Biden said. “Today, I’m announcing more than $60 million in funding to help coastal areas in Puerto Rico to become better prepared for the storm. For example, we can create a flood warning system to help shore up levees and floodwalls.”

During his remarks, the president touched on declaring disaster assistance before Hurricane Fiona ever made landfall — touting his administration’s assistance in providing home repairs and lost property, as well as over 1,200 FEMA personnel he said were on the ground in Puerto Rico helping with search, rescue and cleanup.

Fiona lashed an already-weakened power grid in Puerto Rico in September, leaving much of the island in darkness and struggling to recover.

“And between all minorities, we have 20% of our state is minority,” he said. “And so I I was sort of raised in the Puerto Rican community at home politically.”

The president’s trip comes as the damage in Florida from Ian only starts to come into view.

Search-and-rescue efforts were ongoing as of Sunday, Criswell said on “This Week,” meaning the death toll could easily rise as more of the area is surveyed.

The White House has yet to say whether Biden will meet with Florida GOP Gov. Ron Desantis in Florida on Wednesday but repeatedly emphasized that the government was working as “one team” after Hurricane Ian.

“The focus is going to be on the people of Florida,” press secretary Karine Jean-Pierre said. “And I’ll say this, as the president has said, we are all one team when it comes to Hurricane Ian. We will continue to work alongside the governor and local officials to support the people of Florida.”