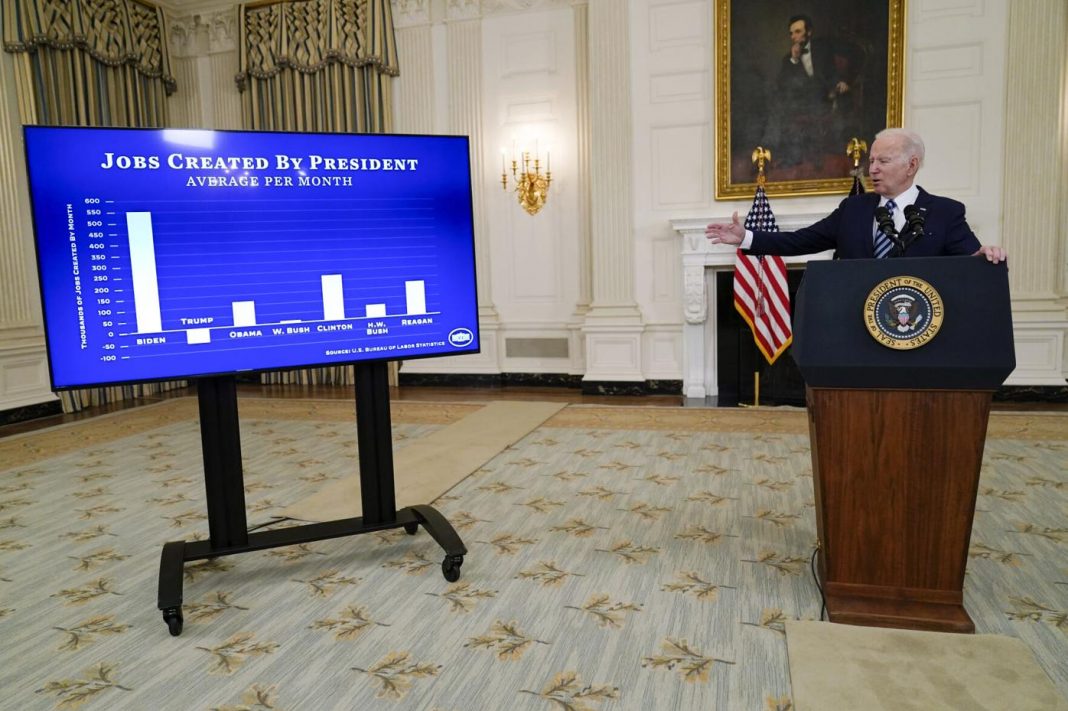 West News Wire: President Joe Biden was pleasantly surprised to learn that the US economy had weathered the coronavirus’s Omicron wave and added 467,000 new jobs in January, with strong revisions to job growth in the previous two months. It demonstrated how much the pandemic’s grip on the economy has loosened, despite the country’s continued struggle with rising prices.

At the White House, Biden claimed, “Our country has taken everything COVID-19 has thrown at us, and we’ve come back stronger.”

According to the jobs data, the US has entered a new phase in its recovery from the pandemic. It was also the culmination of the president’s comeback week.

Also on Friday, the House passed a bill to jumpstart computer chip production and development, a key step for reconciling differences with an earlier measure approved by the Senate. And a day earlier, outside the economy, the administration announced that U.S. forces had raided the home of the ISIS leader, leading Abu Ibrahim al-Hashimi al-Qurayshi to blow himself up.

Harvard University economist Jason Furman, a former adviser in the Obama White House, said the jobs report showed that employers and workers had gotten over the havoc caused by the pandemic.

The virus “is now one factor among many and no longer the dominant factor it was,” said Furman. He pointed to broad strength across the report and the addition of 151,000 jobs in the leisure and hospitality sector restaurants, hotels, entertainment and more in an area of the economy most prone to disruption from the pandemic.

Yet as the economy strengthens, a question for Biden personally  and his presidency  is whether he can stitch together the positives in a convincing way to revive his support that has declined in polls in the past year.

Who and what gets credit?

The infections caused by Omicron had caused millions of Americans to miss work, leading to expectations that the economy lost jobs in January. Yet when the figures showed the virus had little impact, Republicans were quick to offer an alternative narrative  that the job gains reflected the expiration of unemployment benefits added with a push by Biden and his Democrats months earlier.

“Now that there is no longer a barrier to work in the form of Democrats’ unemployment bonuses and monthly stimulus checks, Americans are finally coming off the sidelines,” said Texas Rep. Kevin Brady, the ranking Republican on the House Ways and Means Committee.

And, jobs aside, Biden acknowledged things aren’t entirely rosy. Inflation remains a major challenge, with consumer prices increasing at 7% over the past year.

The strong jobs report, however, may give the Federal Reserve reason to raise interest rates and pull back on its support for the economy to reduce inflation. Average hourly earnings rose 5.7% in January from a year ago, suggesting that the demand for workers is leading to higher incomes and possibly more sources of inflation. Joe Brusuelas, chief economist at the consultancy RSM, said the solid labor market should make it easier for the Fed to hike rates without disrupting growth very much. It’s possible that workers will come out of the pandemic more productive than before, making it easier for growth to occur even as interest rates rise.

“Given the fact that corporate earnings have continued to rise at a rapid pace even while wages have risen rapidly,” Brusuelas stated, “it appears that the American commercial sector and economy are experiencing a productivity boom.” “This strongly suggests that the economy will be able to absorb future rate hikes more effectively than currently assumed.”

Biden tried to make a run for the record books on Friday, citing the accomplishments made under his leadership. With unemployment at 4% and 6.6 million jobs added in his first full year in office, he’s arguing that his $1.9 trillion coronavirus relief package was a sensible decision, and that lawmakers should now back the rest of his program to keep the economy growing.

“History has been made here,” Biden declared “It comes alongside the largest drop in unemployment rate in a single year on record, the largest reduction in childhood poverty ever recorded in a single year. And the strongest economic growth this country has seen in nearly 40 years.”