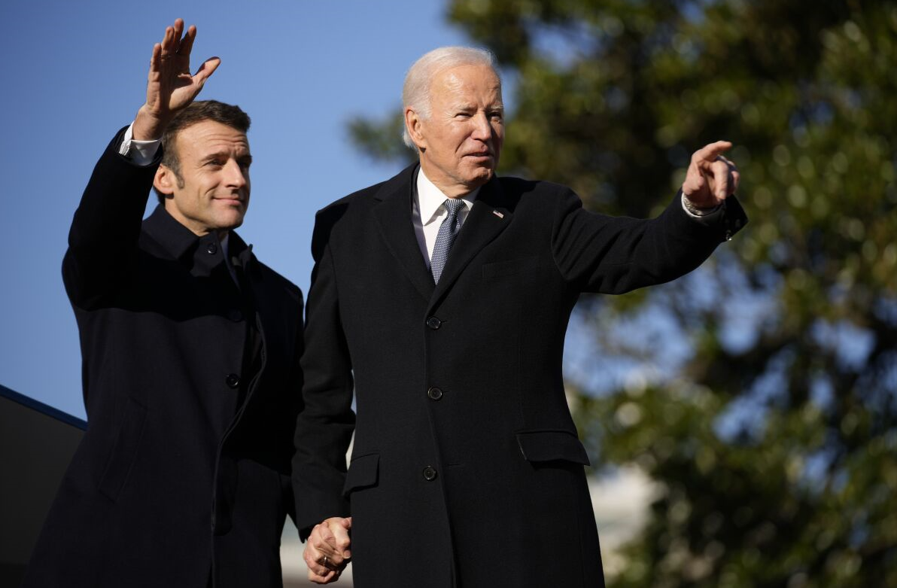 West News Wire: As they held discussions in Washington, President Joe Biden and his French colleague Emmanuel Macron vowed to keep working on their common commitments, including protecting Ukraine against a Russian invasion.

During an official ceremony outside the White House on Thursday in advance of the meeting, Biden said, “France and the United States are once again defending the democratic values and universal human rights, which are the core of both our nations.”

The US intervention in World War II to liberate France from Nazi Germany was one of the historical events that brought the two countries closer, and Macron was similarly strong in describing the strength of the US-France connection.

Before mentioning the conflict, the French president added, “Our two nations are sisters in the battle for freedom.”

“We bear a duty to this shared history as war returns to European soil following Russia’s aggression against Ukraine. And in light of the multiple crises our nations and our societies face, we need to become brothers in arms once more,” Macron added.

Biden is set to honour Macron with the first state dinner of his presidency later on Thursday.

First, the two leaders held talks in the Oval Office that officials from both nations said were expected to largely centre on efforts to stay united in response to the war in Ukraine and to pursue a coordinated approach to China.

In a statement describing the discussion, the White House said Biden and Macron pledged to deepen cooperation on a wide-ranging list of issues, including on assistance to Ukraine, collective defence, nuclear deterrence, climate change, and bilateral investment and trade.

“They look forward to the work of the US-EU Taskforce on the Inflation Reduction Act to further strengthen the US-EU partnership on clean energy and climate through mutually beneficial ways,” the statement said.

But before Thursday’s meeting, Macron said he and other European leaders remained deeply concerned about Biden’s signature climate law, which favours American-made technology, including electric vehicles.

The French president criticised the Inflation Reduction Act, saying the US incentives were hurting European companies by providing an unfair advantage to their American competitors.

Macron said that while Washington and Paris were “working closely together” on geopolitics and opposing Russia in its invasion of Ukraine, provisions of the act and other US laws that affect international trade were not coordinated with Europe.

“They create just the absence of a level playing field,” he told ABC’s Good Morning America earlier on Thursday.

In an address at the French embassy on Wednesday, Macron emphasized a similar point, stating that “the decisions that have been chosen are choices that will fracture the West.”

Robert Habeck, the economy minister for Germany, added on Wednesday that Europe is opposed to US subsidies.

Habeck told reporters in Berlin, “I believe that this view is broadly shared by those countries who are dedicated to a multilateral trading arrangement. The European Commission will have informed the Americans that this is how we perceive it as well.

A year before to Macron’s trip to Washington, the US, UK, and Australia irritated France by negotiating a deal that will see Washington and London give Canberra nuclear-powered submarines.