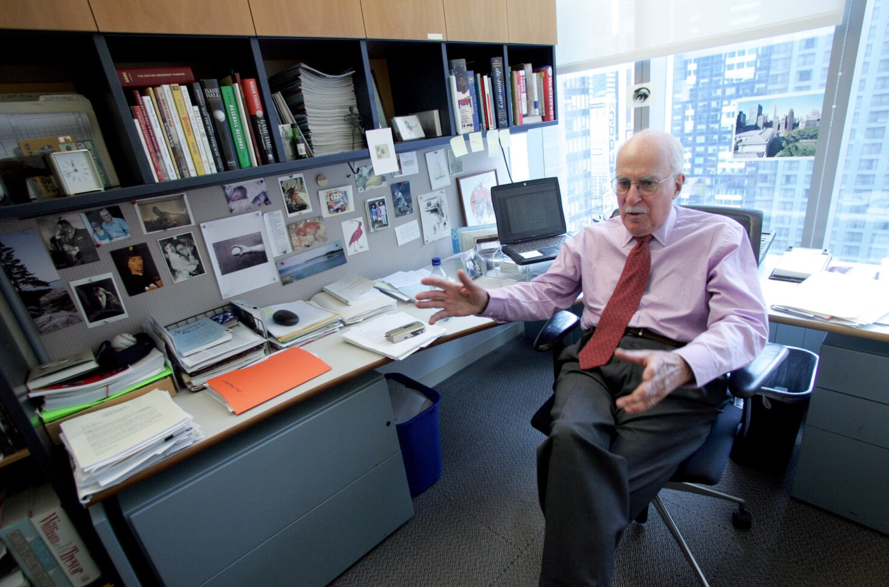 West News Wire: Roger Angell, a well-known US columnist and reporter who was frequently referred to as baseball’s poet laureate, passed away at the age of 101.

Over the course of six decades, he covered the game as a journalist for the New Yorker in a unique and creative approach that encouraged a number of writers.

He objected to the flowery praise, claiming that he was a reporter who wrote from the viewpoint of a fan.

His colleagues praised him for bridging the gap between society and sport.

Roger Angell’s colorful language brought his reports to life, especially in his monthly end-of-season writings, whether it was comparing a certain club to “a troupe of gazelles represented by a Balkan corps de ballet” or mentioning the “habitual aura of glowering intensity” of a favorite pitcher.

“I think the real fans are the fans of terrible teams, because they know what good baseball is and they know how far their own players fall short,” he said in an interview in 1982.

“The rallying cry that has always struck me as so poignant and beautiful is, ‘Come on, you bum!’ which means, ‘We know you’re no good but we want to win.'”

Angell was born into a literary family in New York in September 1920 and began his lengthy association with the New Yorker in 1944, when the magazine published a short story of his.

He joined the staff full-time in 1956, but his main job was as a fiction editor. He did not start writing about baseball until 1962, when editor William Shawn decided he wanted more sports in the magazine.

He was still contributing to the magazine when he reached his centenary.

London-based journalist and writer Michael Goldfarb told the news reporters that Angell was to baseball what writers CLR James and John Arlott were to cricket.

“You couldn’t help but be a little jealous of his ability to insert some highbrow literary metaphor into a description of, basically, a game,” he said.

“The guy was genuinely productive for a very long time, and longevity confers mystique.”

Although he was a privileged part of an “extraordinary New York intellectual milieu that no longer exists in quite the same way”, he never lost sight of baseball’s place in American society, Michael Goldfarb said.

“He didn’t layer sociology on it, but there was always a broad social context,” he added.

Another veteran US journalist, Paris-based Bill Hinchberger, agrees, saying that Angell explored “the relationship between the society and the game”.

He told the reporters that when Angell started writing, baseball was seen as America’s national pastime, a status that has since been eroded by the rise of American football and basketball.

“The way I learned to start using language was reading people like Angell,” Mr. Hinchberger said. “I was already interested in the subject matter, but it’s a whole different level of engagement when the writing is that good.”

Angell belonged to a 20th Century US literary tradition in which writers such as Norman Mailer, Damon Runyon and Hunter S Thompson wrote about sports in addition to their fiction and other journalism.