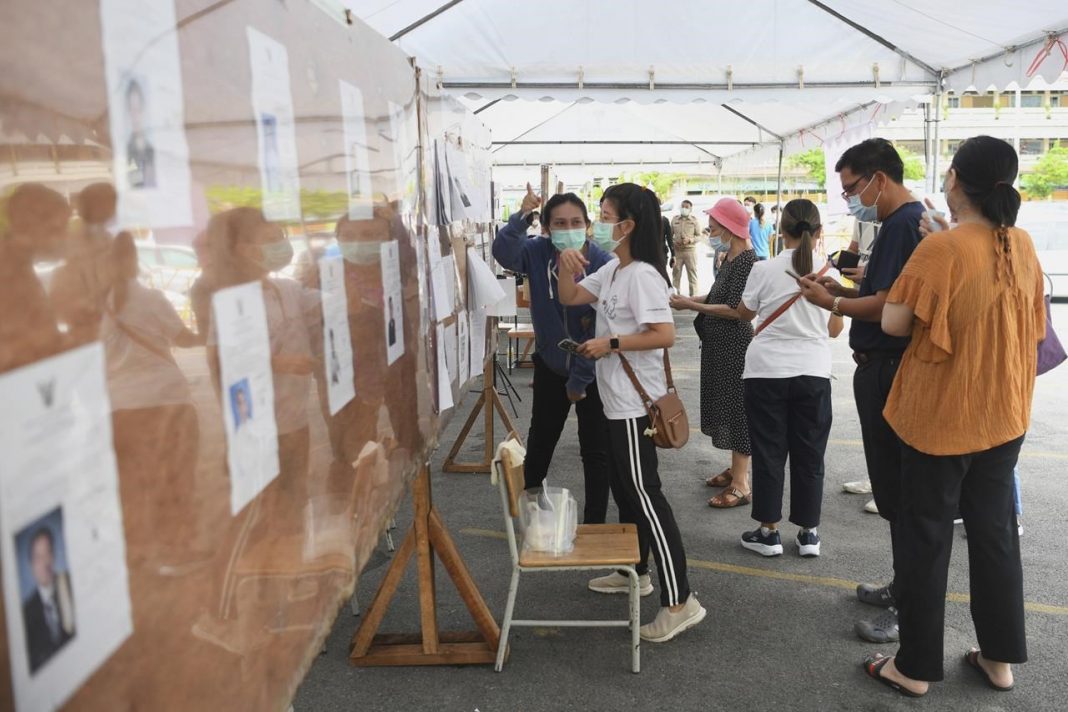 West News Wire: Voters in Thailand’s capital went to the polls on Sunday to elect a new governor in a race delayed by a military coup that nevertheless reflects a divided society, with primary candidates backed by either the conservative establishment or the liberal opposition.

A record 31 contenders entered the contest, but the most widely followed struggle is between two independents.

Former Transport Minister Chadchart Sittipunt is a front-runner, as is Asawin Kwanmuang, the military-appointed governor since 2016. He resigned in March to run in the election.

The candidates campaigned on issues including congestion, pollution and persistent flooding. There are 4.4 million registered voters in the city, the country’s biggest. Apart from governor, they’re also electing city council members. Bangkok’s last gubernatorial election was in 2013, a year before the military toppled a democratically elected government.

Neither the main opposition party in Parliament, Pheu Thai, nor the ruling Palang Pracharath party, associated with the military and the ruling conservative establishment, officially have candidates on the ballot.

However, 55-year-old Chadchart is seen by both supporters and opponents as a proxy for Pheu Thai, for which he stood as a prime ministerial candidate in the 2019 general election. He served as transport minister in a Pheu Thai government in 2012-2014.

His main rival is 71-year-old Asawin, who was appointed governor in 2016 by Prayuth Chan-ocha. As army commander, Prayuth seized power in the 2014 coup to lead a military regime, and he dismissed the previous governor over corruption allegations. Prayuth was returned to office following the 2019 election as prime minister in a coalition government.

Prayuth, in power for eight years, is expected soon to face a no-confidence motion in Parliament, and rivals on his own side have long been rumored to be seeking to remove him. Even if he survives, there must be a general election by early next year.

Prayuth was able to rule by decree as head of a military government but has struggled within the limits of parliamentary democracy, taking fire especially for fumbling Thailand’s coronavirus vaccination program and recovery plan.

Other candidates include Suchatvee Suwansawat of the Democrat Party. He’s seen as having an outside chance if conservative voters support him instead of Asawin. The Democrats have historically been a power in Bangkok but have fractured badly in the past two decades of polarized politics that have seen street violence and two coups.

A fourth candidate whose results will be carefully watched is Wiroj Lakkhanaadisorn from the progressive opposition Move Forward Party, which takes a more critical stance than Pheu Thai toward the government.

Political science professor Thitinan Pongsudhirak of Bangkok’s Chulalongkorn University noted this was the first significant election since the 2014 coup.

“People are hungry to have a say,” he said in an email to The Associated Press. “The result, if it clearly goes against ruling Palang Pracharat, would be consequential for Parliament, Prayuth and no-confidence.”

Bangkok is administratively a province as well as a city, and the only one where residents can choose their own governor, who is appointed elsewhere by the country’s Interior Ministry.