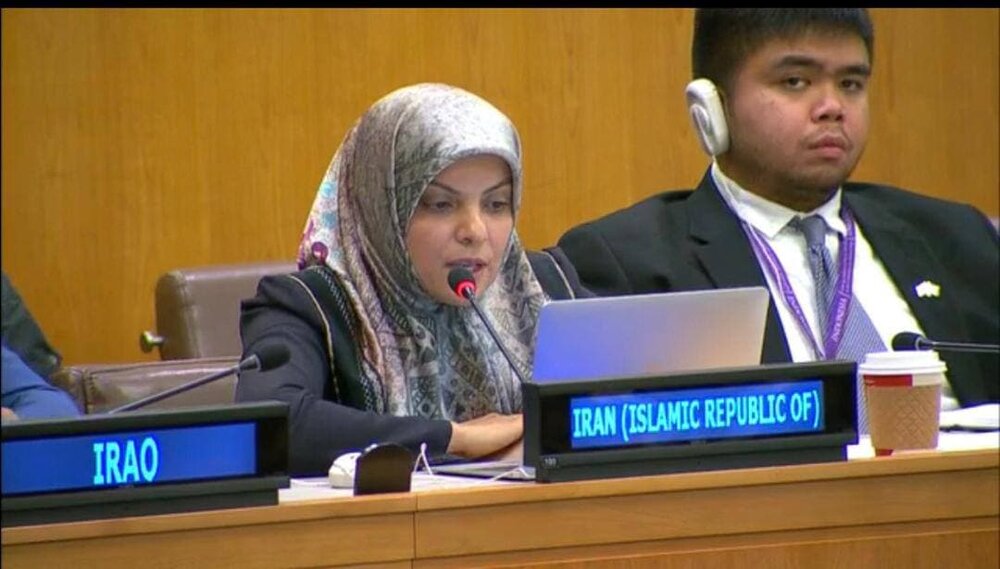 West News Wire: Iran envoy to the UN has warned about recent attempts to create artificial maritime “incidents” in the Persian Gulf and the broader region, after the US and its allies accused Tehran of an attack on an Israeli-owned ship, urging a swift end to such “irresponsible acts” that harm the region’s peace.

In a letter to the president of the United Nations Security Council on Wednesday, the deputy permanent representative of Iran to the UN, Zahra Ershadi, rejected the “unfounded” accusation leveled by Britain, Liberia and Romania that Iran had been behind the attack on the Israeli tanker — Mercer Street — off the coast of Oman without presenting any shred of evidence to substantiate their claims.

“This unfounded claim — which was first raised, for obvious political purposes, by the Israeli regime immediately after the attack — is factually wrong and politically and ethically irresponsible, and accordingly is categorically rejected,” she said.

She added that Iran enjoys long coasts and numerous port facilities in the Caspian Sea, the Persian Gulf and the Sea of Oman as well as high maritime shipping capacity and attaches “great importance to the maritime security and freedom of navigation.”

On Tuesday, Britain, Romania and Liberia told the UN Security Council that it was “highly likely” that Iran used one or more drones to carry out the attack on Liberian-flagged oil tanker, which was managed by Israel, last week.

Two crew members, a Briton and a Romanian, were said to have been killed in the incident.

“This attack disrupted and posed a risk to the safety and security of international shipping and was a clear violation of international law,” the trio said in a letter to the 15-member council.

Ershadi reiterated Iran’s full commitments to its relevant international obligations and said the country has significantly contributed to the promotion of maritime security and freedom of navigation.

“The deployment — for well over a decade — of Iran’s naval forces to the Indian Ocean and the adjacent areas in support of international efforts in combating piracy therein has repeatedly been acknowledged by the United Nations Secretary-General in his relevant reports and commended by the Security Council in its numerous resolutions,” the Iranian diplomat said.

The United States also joined its allies on Sunday in accusing Iran and said they would work with their allies to respond.

Citing an informed source, Nour News, a media outlet close to Iran’s Supreme National Security Council, said the country would give a strong and crushing response to any measure taken against its national interests and security, blaming Britain and the US for the consequences of such moves against Tehran.

Elsewhere in her letter, Ershadi firmly rejected similar and other baseless claims made by the Israeli regime as the main source of instability and insecurity in the region and beyond for more than seven decades.

She drew attention to the Israeli regime’s systematic violations of international law, including its significant threats to maritime security and freedom of navigation, as well as its long record in conducting complicated false-flag operations in the high seas and key international waterways.

“The Security Council must remain fully vigilant about the security and military adventurism of this regime in such a volatile region as the Middle East, condemn such acts and hold it accountable for all its unlawful and yet highly destabilizing activities,” Ershadi said.

Pointing to the very recent provocative statements by the Israeli regime’s officials threatening to use force in gross violation of the UN Charter, the Iranian envoy emphasized that Tel Aviv must be reminded that it shall bear the consequences of all its “possible adventurism and miscalculations.”

She warned about such threats from any source and said Iran “will not hesitate to take all necessary measures to vigorously protect its people, defend its sovereignty and secure its national interests.”

Meanwhile, in a Wednesday letter to the secretary general of the International Maritime Organization (IMO), Iran’s Ambassador to London Mohsen Baharvand condemned the false news accusing the Islamic Republic of making certain moves to harm the security of naval traffic in the Persian Gulf and the Sea of Oman.

Baharvand rejected the baseless and politically motivated accusations, which he said are all aimed at harming the peaceful naval passage and urged international cooperation in confronting such destabilizing stands.

He reaffirmed Iran’s commitment to safeguarding peace and security of navigation in the region, which is to the benefit of both Iran and the international community.

He emphasized that adventurist moves and ill-intentions of certain countries, mixed with a language of threats and harsh words against Iran, are in violation of the fundamental principle of refraining from resorting to force based on the UN Charter and would put at stake the security of navigation in the region in the long run.

The Iranian ambassador called on every country and player on the international scene to remain committed to the accepted international laws, including the Convention of the IMO, on security and safety of navigation at international water passages, including in the Persian Gulf and the Sea of Oman.