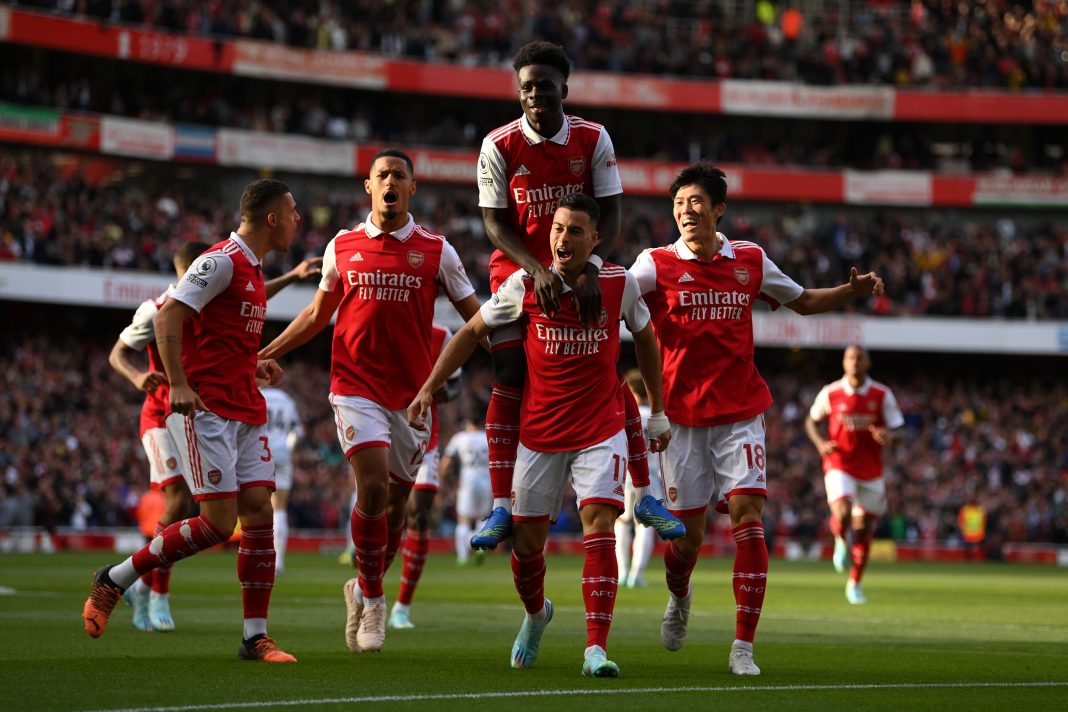 West News Wire: On Sunday, Arsenal overcame Liverpool 3-2 in a thrilling match that saw the Gunners retake first place in the Premier League.

Bukayo Saka added a pair of goals, while Gabriel Martinelli added an early goal to boost Arsenal’s chances of winning the league this year.

Martin Odegaard’s through cross was perfectly timed for Martinelli to head past Liverpool goalkeeper Allison Becker in the 58th second to give Liverpool the lead.

Arsenal dominated the opening phases of the match, but Liverpool gradually gained control of the action and leveled the score in the 34th minute thanks to a goal from Darwin Nunez.

The Uruguayan was able to finish Luis Diaz’s cross from the right after finding space in the box.

But Arsenal were not behind for long. In the fifth minute of added time, Martinelli marauded down the left, and Saka ghosted in behind Trent Alexander-Arnold and got an outstretched leg onto the sweeping cross at the far post.

Jurgen Klopp’s Reds showed their quality in flashes at the Emirates, but once again fell pray to the defensive frailties that have plagued their season so far.

Arsenal carried their momentum into the second half, and Firmino’s equaliser in the 53rd minute came against the run of play.

Diogo Jota found Firmino on the edge of the box, and the Brazilian took a couple of touches to get past William Saliba and neatly found the bottom corner with a finish that looked a lot easier than it was.

Arsenal’s intensity on the game eased slightly, but they never let go of their hold over the match.

Roared on by a febrile Emirates crowd, Mikel Arteta’s men pushed for a winner.

Gabriel Jesus drew a foul in the box in the 76th minute, and after a lengthy delay caused by a scuffle between Granit Xhaka and Jordan Henderson, Saka coolly stroked his penalty home.

Since his miss in the Euro final against Italy last year, the Englishman has scored penalties against Chelsea, Manchester United and now Liverpool.

The final whistle could not come soon enough for Arsenal, and it was followed by an explosion of euphoria.

Arteta’s team have now won eight of their last nine matches and are a point above Manchester City on the table.

Their title challenge is beginning to find its feet.

Liverpool remain in 10th place and could slip into the bottom half of the Premier League by the end of the weekend.