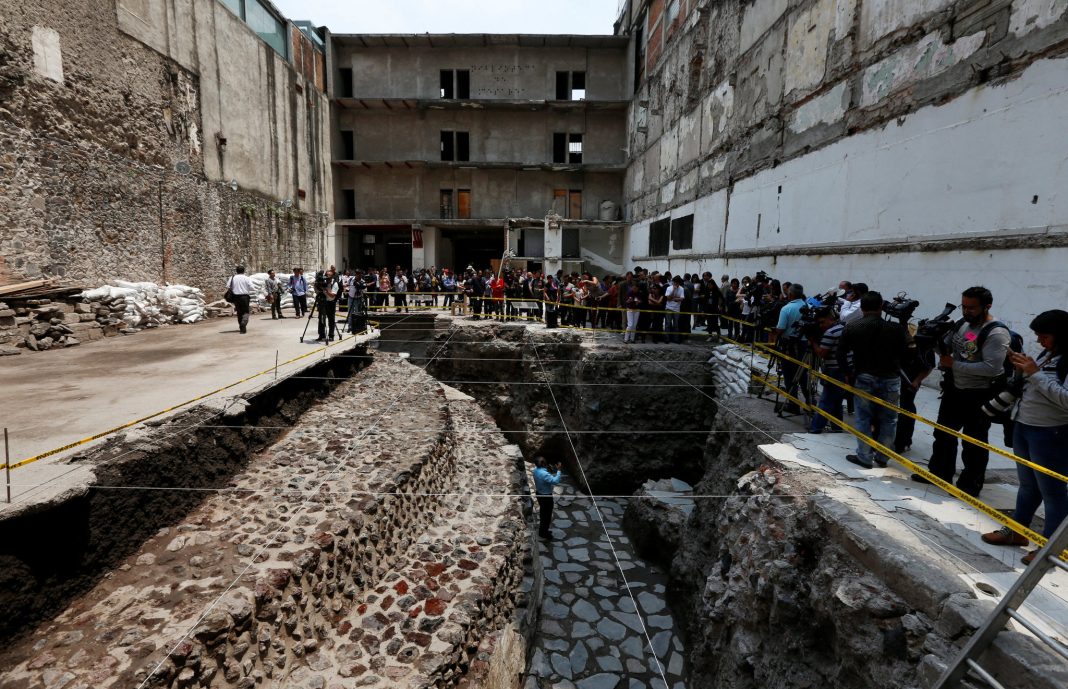 West News Wire: The discovery of a large stockpile of ceremonial gifts from the Aztecs beneath Mexico City’s downtown area, off the steps of what would have been the empire’s holiest shrine, sheds new light on pre-Hispanic religious practices and political rhetoric.

The contents of one box discovered in the exact center of what was once a circular ceremonial stage, sealed in stone boxes five centuries ago at the foot of the temple, have broken records for the number of sea offerings from both the Pacific Ocean and off Mexico’s gulf coast, including more than 165 once-bright-red starfish and upwards of 180 full corral branches.

“Pure imperial propaganda,” Leonardo Lopez Lujan, a lead archaeologist at the Proyecto Templo Mayor of Mexico’s National Institute of Anthropology and History (INAH), which is overseeing the dig, said of the likely spectacle.

In the same box, archaeologists previously found a sacrificed jaguar dressed like a warrior associated with the Aztec patron Huitzilopochtli, the war and sun god, before the COVID-19 pandemic forced a pause on excavations for more than two years.

Previously unreported details include last month’s discovery of a sacrificed eagle held in the clutches of the jaguar, along with miniature wooden spears and a reed shield found next to the west-facing feline, which had copper bells tied around its ankles.

The half-excavated rectangular box, dating to the reign of emperor Ahuitzotl, who ruled from 1486 to 1502, now shows a mysterious bulge in the middle under the jaguar’s skeleton, indicating something solid below.

“Whatever is underneath the jaguar is something enormously important,” said Lopez Lujan. “We’re expecting a great discovery.”

Lopez Lujan, who heads excavations at what is today known as the Templo Mayor, thinks the box could contain an urn holding the cremated remains of Ahuitzotl, the emperor whose military campaigns expanded the empire to modern-day Guatemala while linking Mexico’s Pacific and gulf coasts.

But he says at least another year of digging is needed to settle the question.

To date, no Aztec royal tomb has ever been found despite more than 40 years of digging around the Templo Mayor, where more than 200 offerings boxes have been found.

The temple towered as high as a 15-storey building before it was razed in the years after the 1521 Spanish conquest of Mexico, the rubble serving to obscure many of the latest finds.

Besides the central offering containing the jaguar, two additional boxes were recently identified adjacent to it, with both set to be opened in the next few weeks.

The aquatic offerings covering the jaguar may represent the watery underworld where the Aztecs believed the sun sank each night, or possibly part of a king’s journey after death.

Joyce Marcus, an archaeologist specialising in ancient Mexico at the University of Michigan, says the recently unearthed offerings illuminate the Aztec “worldview, ritual economy, and the obvious links between imperial expansion, warfare, military prowess and the ruler’s role” in ceremonies that sanctified conquests and allowed tributes to flow into the capital.