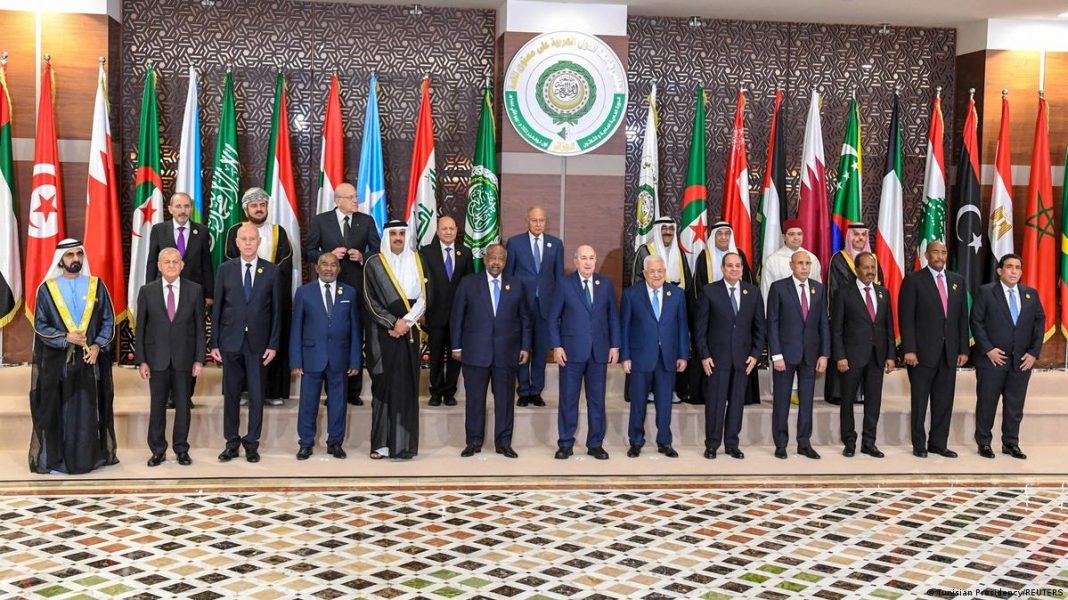 West News Wire: Arab leaders emphasized the importance of the Palestinian struggle as they concluded their first summit conference in two years, but they avoided addressing their own differences regarding the normalization of relations with Israel.

The Arab League summit in Algiers, which lasted two days, came to an end on Wednesday with a final statement that emphasized the group’s continued support for the establishment of a Palestinian state, the defense of Jerusalem’s holy sites against Israeli violations, and its condemnation of Israel’s use of violence and its blockade of Gaza.

However, the 22 member states refrained from publicly denouncing the occupying force in Palestine.

In his opening remarks on Tuesday, Algerian President Abdelmadjid Tebboune had pledged to put forth considerable efforts to reaffirm support for Palestinians as the Arab and international communities’ attention shifts to other conflicts and crises.

“Our main and first cause, the mother of all causes, the Palestinian issue, will be at the heart of our concerns and our main priority,” Tebboune said.

The Arab League was created in 1945 to promote unity, but in recent years, it has been marred by increasing divisions.

For decades, the group has been committed to establishing Palestine as an independent state, but its response has been fractured by issues including civil war in Syria and the decision by some to normalise ties with Israel.

Since the last Arab League summit in 2019, the United Arab Emirates, Bahrain, Morocco and Sudan have agreed to normalise diplomatic relations with Israel.

Other Gulf states that maintain relations with Israel, such as Oman and Qatar, have declined to follow suit in formalising their ties.

The final declaration made no new proposals for advancing Palestinian statehood or rights, as former Israeli Prime Minister Benjamin Netanyahu looked set on Wednesday to return to power in one of the most right-wing coalitions in. There was no formal mention of Israel’s election during the many speeches at the summit that spoke of Palestinian rights.

The splits among Arab states over peace with Israel and how to advance the Palestinian cause were not publicly aired during the meeting.

The summit’s discussions also focused on the food and energy crises aggravated by Russia’s war in Ukraine , which has had devastating consequences for Arab countries, including Yemen, which imported 40 percent of its grain from the Eastern European country before Russia’s invasion.

Despite the dire consequences of the Ukraine war, Arab leaders “decided to remain neutral”, Khodr said.

“This is a diplomatic win for Russia because Moscow had been isolated internationally,” the reporter added.

On Sunday, Russia announced it was temporarily pulling out of a UN-backed agreement to allow the export of grain from Ukraine, accusing Kyiv of misusing the safe shipping corridor to launch a drone attack on its Black Sea fleet.

Following “adequate” assurances from Kiev that it wouldn’t use the maritime corridor for military activities against Moscow, the Russian defense ministry announced on Wednesday that Moscow would once again take part.

Khodr claimed that Arab leaders in Algiers had been monitoring the developments with concern.

She said that the recent agreement by the OPEC+ group of countries to cut oil production, which heightened fears about skyrocketing prices, served as a unifying force at the summit.

There were tensions between Saudi Arabia and the United States as a result of the decision to reduce output by two million barrels per day (bpd) just before the busy winter season. President Joe Biden warned that there would be “consequences” for bilateral relations.