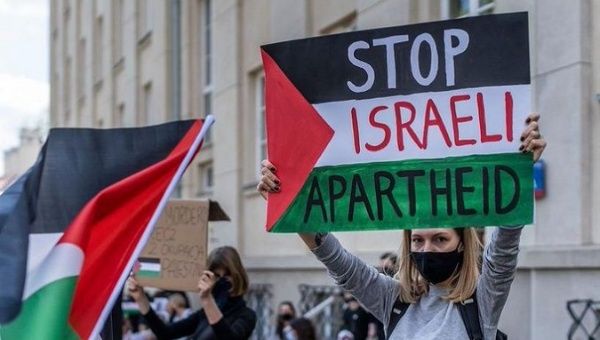 West News Wire: New Israeli regulations prohibiting the display of the Palestinian flag are a “shameless attempt to legitimize bigotry,” according to the rights organization Amnesty International.

Ben-Gvir posted on Twitter, “I have ordered the Israeli police to enforce the ban on flying a PLO (Palestine Liberation Organization) flag in public spaces, a symbol of identification with a terrorist organization.”

He continued, “We will confront terrorism and its sympathizers with all of our power.

Prime Minister Benjamin Netanyahu created a government this month after winning the elections in November, with friends on the far right filling important positions.

They include Ben-Gvir of the Jewish Power party, who has a history of inflammatory remarks about Palestinians.

Amnesty called the new measures “repressive” and an “audacious attack on the rights to nationality, freedom of expression and freedom of peaceful assembly”, in a statement sent to AFP.

In May last year, at the funeral of slain Palestinian-American journalist Shireen Abu Akleh, a veteran Al Jazeera reporter, baton-wielding Israeli police beat pallbearers carrying the coffin, which was covered by a Palestinian flag.

Although it is not illegal to fly the Palestinian flag, Israeli laws prohibit the public display of a flag of an enemy country or group hostile to Israel’s existence.

“Israeli authorities say the directive is aimed at stopping ‘incitement’ against Israel, but it comes amid a string of measures designed to silence dissent and restrict protests, including those held in defence of Palestinian rights,” Amnesty said.

“The farcical pretexts for this directive cannot mask the fact that Israeli authorities are growing increasingly ruthless in their attempts to silence Palestinian voices,” the statement added.