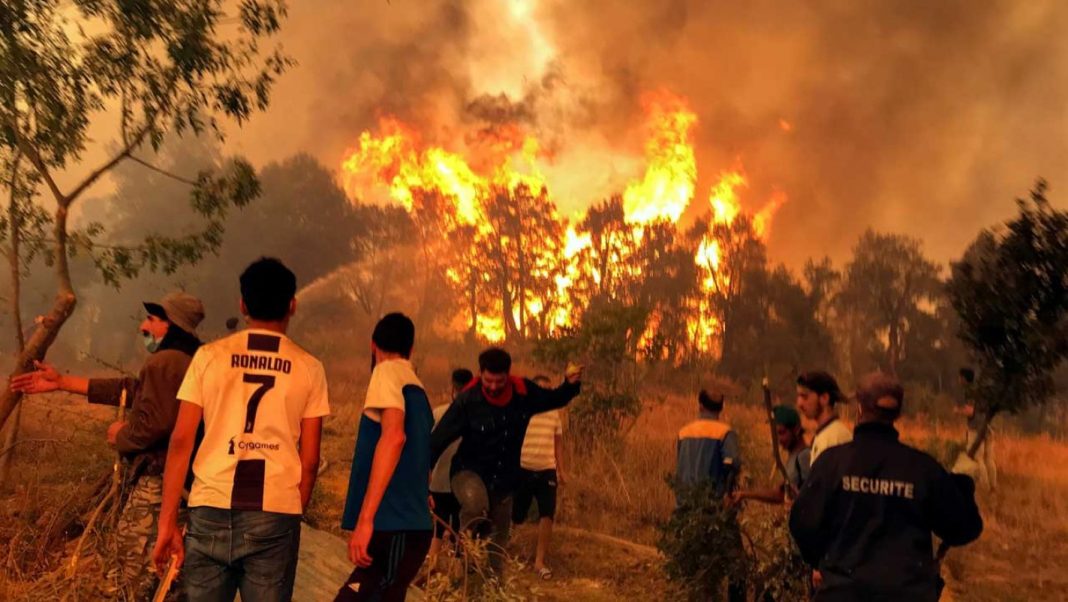 West News Wire: In many regions of northern Algeria, wildfires are still raging and have already claimed the lives of at least 26 people and injured dozens more.

Residents of 14 provinces in Algeria were devastated by fires on Wednesday; they have previously voiced complaints about the lack of government help and preparedness during the country’s yearly and deadly wildfire season.

24 of the fatalities were recorded in El Tarf region, which is close to the country’s northeastern border with Tunisia, Interior Minister Kamel Beldjoud said on state television.

Emergency services reported that a 58-year-old woman and her 31-year-old daughter were murdered in a fire in the further western province of Setif.

People were also seen fleeing in Souk Ahras province, which also borders Tunisia, with local media reporting that 350 residents had been evacuated.

Authorities said a total of 39 fires burned on Wednesday, with several still threatening residents into Thursday. Firefighters and helicopters dropping water buckets were working to contain the flames.

Beldjoud said a so-called water bomber plane chartered from Russia had broken down and would not be operational until Saturday.

The situation underscored the perennial criticism that Algiers has not invested enough in firefighting technology, including specialised planes, forcing it to seek help from the international community.

In 2021, Algeria appealed to the European Union, already preoccupied with fires in Greece and Turkey, to send water bomber planes amid that year’s deadly fires.

Algiers blamed those blazes, which killed 90 people and destroyed more than 4.1 million hectares (10.1 million acres) of forest, on “arsonists” connected to separatist groups and foreign governments.

Algerian authorities earlier this year also reportedly cancelled a contract with a Spanish company for the supply of seven water bomber planes following a diplomatic dispute between Algiers and Madrid, according to the Mena Defense website.

The discord came after Madrid reversed decades of neutrality on Western Sahara and supported a plan to grant the Moroccan-controlled region internal autonomy, while denying sovereignty.

Since the start of August, 106 fires have broken out in the country, destroying more than 2,500 hectares (6,178 acres) of woodland.