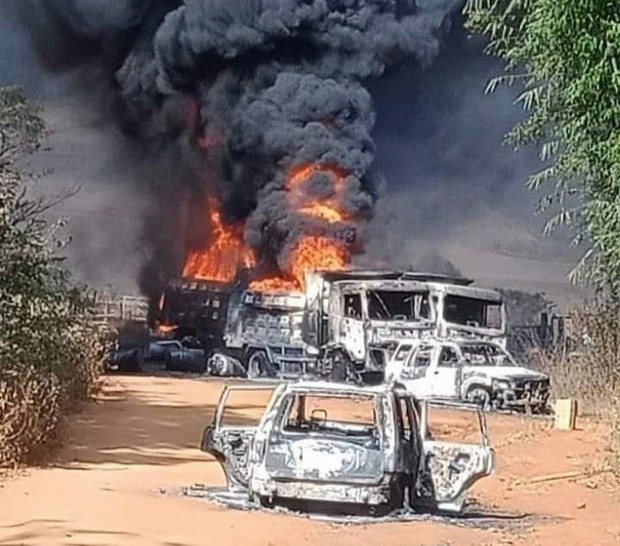 West News Wire: According to a school administrator and an aid worker, government helicopters targeted a school and town in north-central Myanmar, killing at least 13 people, including seven children.

Attacks by the military government on pro-democracy militants and their sympathizers frequently result in civilian fatalities. However, it appeared that the number of children killed in the airstrike last Friday in Tabayin township in the Sagaing district was the most since the army took control in February of last year, overthrowing Aung San Suu Kyi’s democratic administration.

The army’s takeover led to widespread, nonviolent protests across the country. Armed resistance spread throughout the towns and countryside as a result of the military and police’s use of lethal force in response. Fighting has been especially fierce in Sagaing, where the military has launched several offensives, in some cases burning villages, which displaced more than half a million people, according to a report issued by UNICEF this month.

School administrator Mar Mar said she was trying to get students to safe hiding places in ground-floor classrooms when two of four Mi-35 helicopters hovering north of the village began attacking, firing machine guns and heavier weapons at the school, which is in the compound of the village’s Buddhist monastery.

When the air attack stopped, about 80 soldiers entered the monastery compound, firing their guns at the buildings.

The soldiers then ordered everyone in the compound to come out of the buildings. Mar Mar said she saw about 30 students with wounds on their backs, thighs, faces and other parts of the bodies. Some students had lost limbs.

More than 20 people, including nine wounded children and three teachers, were also taken by the soldiers, she said. Two of those captured were accused of being members of the anti-government People’s Defense Force, the armed wing of the resistance to the military.

Security forces also burned down a house in the village, causing residents to flee.

A volunteer in Tabayin assisting displaced people who asked not to be identified because of fear of government reprisals said the bodies of the dead children were cremated by the soldiers in nearby Ye U township.

Myanmar Now, an online news service, and other independent Myanmar media also reported the attack and the students’ deaths.

A day after the attack, the state-run Myanma Alinn newspaper reported that security forces had gone to check the village after receiving information that the members of the People’s Defense Force were hiding there.

According to the allegation, members of the People’s Defense Force and their comrades from the Kachin Independence Army, an ethnic rebel organization, started shooting at the security forces while hiding inside homes and the monastery, killing one person and injuring several others in the area. The state of the pupils was not mentioned, only that the injured were brought to hospitals.

At least 2,298 people have been slain by security forces since the army seized power last year, according to the Thailand-based Assistance Association for Political Prisoners, which keeps track of human rights in Myanmar.

The U.N. Child Rights Committee reported in June that the organization has documented 260 attacks on educational institutions and staff since the coup.