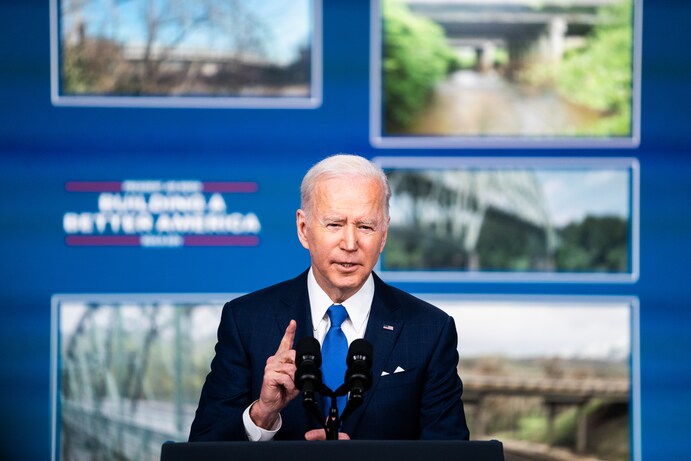 West News Wire: President Biden has had possibly the worst week of his presidency, as he approaches the one anniversary of his inauguration. The concern on the minds of worried Democrats looking ahead to the November elections is whether he has a strategy for a course correction.

The path ahead for Biden appears to be just as difficult as it was when he took the oath of office a year ago, although for different reasons. He arrived a year ago in the midst of a crisis, just days after the Capitol attack on Jan. 6 and with a raging coronavirus outbreak. After four years of chaos under President Donald Trump, he said he was committed to decrease tensions, seek unity, and display effective leadership.

Today, Biden is dealing with challenges that have much to do with how he tried to govern in his first year, problems compounded by resistance from Republicans and his predecessor’s ongoing efforts to undermine faith in democratic processes. He also begins the year with far less popular support than a year ago. Despite some successes, his approval ratings remain in perilous political territory. How he responds will be critical.

Biden has failed to win passage for both voting rights and his Build Back Better legislation, signature priorities of his first year. He could scale back on some of the ambitions and accept smaller victories, but that would require him to confront a liberal, activist wing of his party that has kept the pressure on him to deliver on his big campaign promises. Neither the use of the bully pulpit nor backroom negotiation skills honed over three decades as a senator has produced all that he had hoped or promised. Now what?

The setbacks for Biden last week came from every direction. Inflation last year hit a 40-year high. The Supreme Court blocked his vaccine-or-test mandate for employees of large companies while upholding the mandate for health-care workers. He struggled to defend against criticism that his administration had no plan to make coronavirus testing easily available and that it was providing confusing guidance about dealing with the omicron variant. Talks with the Russians aimed at avoiding war in Ukraine broke off with no apparent progress.

And then there was the issue of voting rights.

The president traveled to Atlanta to pump for two pieces of long-stalled voting legislation, the Freedom to Vote Act and the John Lewis Voting Rights Advancement Act. Instead of being welcomed by allies, he found voting rights activists in Georgia choosing not to show up. Their absence was embarrassing for the White House while unhelpfully highlighting the lack of a strategy to enact either bill.

A week earlier, Biden had won praise for a tough speech on the anniversary of the assault on the Capitol in which he repeatedly called out Trump, though not by name, and issued a vigorous defense of democracy under threat.

On both the economy and the pandemic, Biden must hope that there will be a gradual improvement that the voters begin to feel by early this summer. For months, this has been the mantra of administration officials: Things have to improve and naturally will. Yet nothing the administration can say will persuade people who are feeling bad, about the pandemic or the economy, that they shouldn’t feel bad. As David Axelrod, the Democratic strategist, said, “You can’t jawbone people into feeling better.”

Looking ahead to November, unless things change, the president’s party will suffer the more the elections become a referendum on him. Biden’s chance may be to attempt to alter the emphasis, asking swing suburban voters if a Republican Congress would return the country to the instability of the Trump years, with House GOP leaders threatening retaliation if they gain power and the party lacking a clear governing plan.

This is how Biden’s first year in office is coming to a close. His Democratic colleagues will be looking to him to set the path for the future, including any adjustments that may be necessary, and hope that he can navigate them to safety.