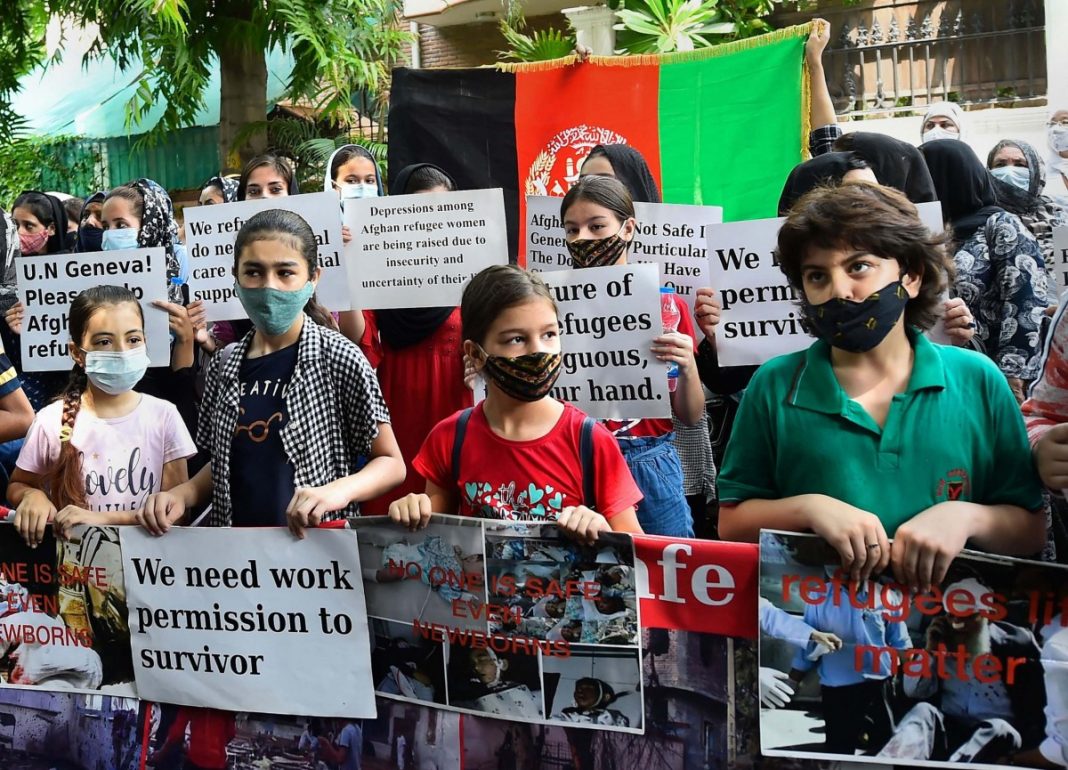 West News Wire: Afghan refugees have congregated in front of the American embassy in Antananarivo, the capital of Madagascar, demanding that their applications be expedited after years of waiting.

The US Refugee Admissions Program was applied for by at least a dozen Afghans, both adults and children, on Monday outside the embassy’s grounds. They claimed they had not heard anything about their applications until two months ago, when they had interviews with US Citizenship and Immigration Services (USCIS) agents.

They claimed that they have since continued to wait for responses.

“They said after one month they give us the result, after now they haven’t given the result,” claimed one refugee, Ahmadullah, who like the others gathered asked to only use his first name for fear of retribution against his family in Afghanistan.

“We have no word,” he told news reporters. “We have nothing.”

Bahar, a spokesman for the group, told news reporters by video chat from the protest “They make us a hostage since 2019. Now we are sitting here in this rain. We will not leave until we get this answer.”

Those gathered said they had worked in support of either NATO forces or US and foreign companies and non-profits in Afghanistan, and as a result, faced Taliban retribution if they returned to their home country.

Bahar, a former IT manager at the Afghan central bank, told news reporters that he had previously worked with the US Agency for International Development (USAID) and his family had provided land and support to US-based NGO Morning Star in their home village of Jegdalek. He fled to Madagascar in 2018 after his mother was killed in a Taliban attack.

Another woman who sat in front of the embassy, Bibi Maria, said she fled Afghanistan that same year with her four children after the Taliban killed her husband, who she said was a supplier for US and NATO troops.

Some of those gathered carried signs with Afghan flags that said “please merci [sic] on us” and “we want results”.

With few options for travel available, the fleeing Afghans said they had chosen Madagascar because they could get a visa on arrival.

As of April, there were 20 United Nations-registered Afghan refugees in the country, according to the UN High Commissioner for Refugees (UNHCR). While the refugees receive some basic support through a local UNHCR-affiliated organisation, they are unable to work, and they say their children are unable to go to school and that access to healthcare remains severely limited.

The protest comes as the US has faced a tidal wave of Afghan refugees seeking entry into the country since the Taliban took control of Afghanistan in August 2021 amid the withdrawal of the US and other NATO forces stationed there.

But there are backlogs of applicants in programmes to relocate Afghan refugees to the US, partly because of the pandemic and also due to Ukrainians fleeing Russia’s invasion of their country.