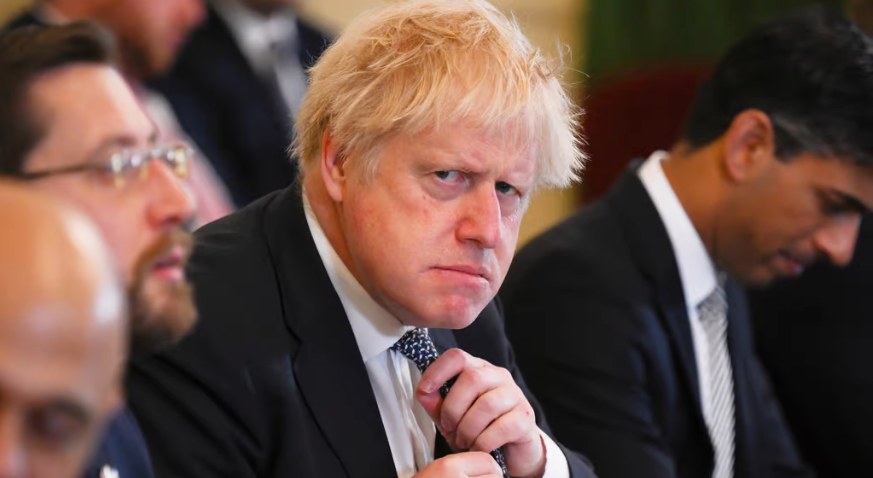 West News Wire: Following months of scandals, two of the most senior members of the British Cabinet resigned on Tuesday, which may have resulted in the demise of Prime Minister Boris Johnson.

After a day in which the prime minister was forced to admit he had to change his story about the way he handled allegations of sexual misconduct by a senior member of his government, Treasury Chief Rishi Sunak and Health Secretary Sajid Javid resigned minutes apart.

In his letter of resignation, Javid stated, “It is with great regret that I must inform you that I can no longer, in good conscience, continue serving in this government.” Although I naturally work well with others, the British people also have a right to expect integrity from their government.

“I recognize this may be my last ministerial job, but I believe these standards are worth fighting for and that is why I am resigning,” he added.

Both Sunak and Javid have been seen as possible leadership contenders within the Conservative Party if Johnson is forced out. Their departures were a huge blow to the prime minister, because both were in charge of two of the biggest issues facing Britain right now the cost of living crisis and the aftermath of the coronavirus pandemic.

The latest scandal saw Johnson hit by allegations he failed to come clean about a lawmaker who was appointed to a senior position despite claims of sexual misconduct.

Johnson has faced pressure to explain what he knew about previous misconduct allegations against lawmaker Chris Pincher, who resigned as deputy chief whip Thursday amid complaints that he groped two men at a private club.

Minutes before the resignations of Javid and Sunak were announced, Johnson told reporters that Pincher should have been fired from the government after a previous 2019 incident.

Asked if it was an error to appoint Pincher to the government, Johnson said “I think it was a mistake and I apologize for it. In hindsight it was the wrong thing to do.”

“I apologize to everybody who has been badly affected by it. I want to make absolutely clear that there’s no place in this government for anybody who is predatory or who abuses their position of power,” Johnson said.

The government’s explanation shifted repeatedly over the past five days. Ministers initially said Johnson wasn’t aware of any allegations when he promoted Pincher to the post in February.

On Monday, a spokesman said Johnson knew of sexual misconduct allegations that were “either resolved or did not progress to a formal complaint.”

That account didn’t sit well with Simon McDonald, the most senior civil servant at the U.K. Foreign Office from 2015 to 2020. In a highly unusual move, he said Tuesday that the prime minister’s office still wasn’t telling the truth.

McDonald said in a letter to the parliamentary commissioner for standards that he received complaints about Pincher’s behavior in the summer of 2019, shortly after Pincher became a Foreign Office minister. An investigation upheld the complaint, and Pincher apologized for his actions, McDonald said.

Johnson’s authority had already been shaken by a vote of no confidence last month. He survived, but 41% of Conservatives voted to remove him from office.

The prime minister’s shifting responses to months of allegations about lockdown-breaking parties in government offices that ultimately resulted in 126 fines, including one levied against Johnson, fueled concerns about his leadership.

When Pincher resigned last week as deputy chief whip, a key position in enforcing party discipline, he told the prime minister that he “drank far too much” the previous night and had “embarrassed myself and other people.”

Johnson initially refused to suspend Pincher from the Conservative Party, but he relented after a formal complaint about the groping allegations was filed with parliamentary authorities.

Critics suggested Johnson was slow to react because he didn’t want to be in the position of forcing Pincher to resign his Parliament seat and setting up the Conservatives for another potential special election defeat.

Even before the Pincher scandal, suggestions were swirling that Johnson may soon face another no-confidence vote.

In the next few weeks, Conservative lawmakers will elect new members to the committee that sets parliamentary rules for the party. Several candidates have suggested they would support changing the rules to allow for another vote of no confidence. The existing rules require 12 months between such votes.